Kobolds in the aquarium are not only called armored catfish. Their lively and peaceful nature, their small size, and their easy durability make them particularly popular and suitable aquarium fish. You can find out which conditions are ideal for metal armored catfish here. 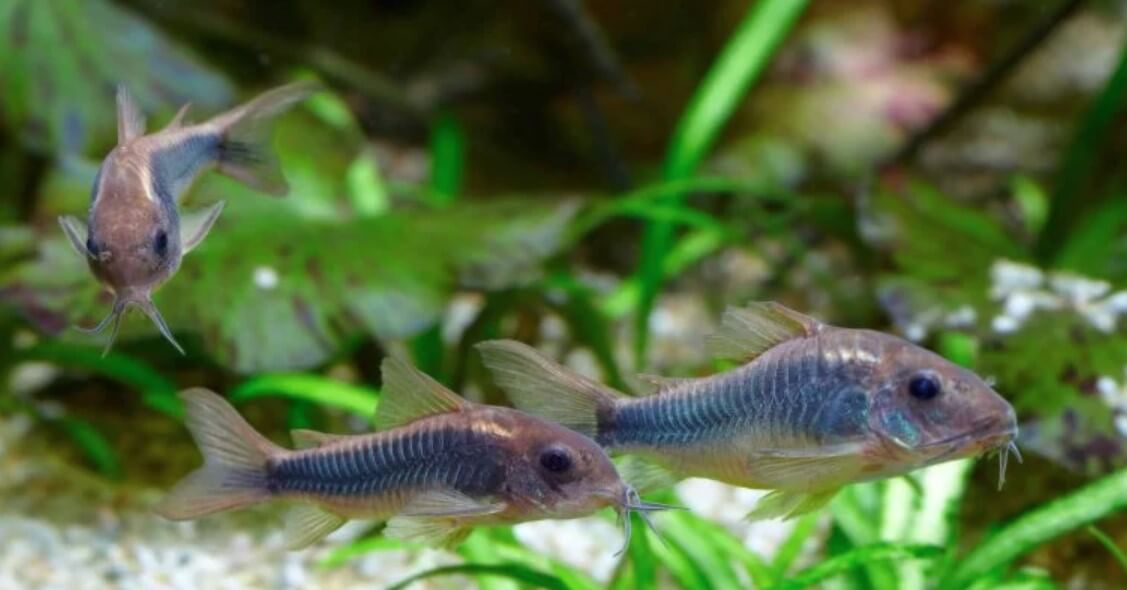 The maximum length is 6.5 cm. Males stay smaller than females.

Due to its large area of ​​distribution, the color is very variable. In addition to the eponymous metallic blue body color, there are also blackish and greenish variants and those in which the side stripes are more or less pronounced.

Females are slightly larger and noticeably fuller. Seen from above, the pelvic fins in the males are often pointed, in the females they are round. The body of the males – also viewed from above – is widest at the level of the pectoral fins, that of the females below the dorsal fin. The sexes of the metal armored catfish do not differ in color.

Often triggered by a change to slightly cooler water, the males begin to chase a female and swim close to her head. After a while, a male stands across in front of the female and clamps her barbels with a pectoral fin. In this T-position, the female lets some eggs slide into a pocket that she forms from the folded pelvic fins. Then the partners separate and the female looks for a smooth place (disc, stone, leaf) to which the strongly sticky eggs can be attached. After spawning is over, it no longer cares about the eggs and larvae, but sometimes eats them. The young, swimming freely after about a week, can be reared with the finest dry and live food.

The armored catfish is about 10 years old.

When foraging for food, the armored catfish dips into the ground up to its eyes and looks for live food here. He can be fed very well with dry food, live or frozen food (worm-like, e.g. mosquito larvae) should be served once a week. It is important that the feed is close to the ground.

Metal armored catfish only feel at home in a group. There should be at least six catfish. How big this group can be depends on the size of the aquarium. In general, one can say that one catfish can care for every ten liters of aquarium water. If you can get larger specimens, keep a few more males than females, but the gender distribution is almost irrelevant.

The tank should have a volume of at least 54 liters for these armored catfish. Even a small standard aquarium with the dimensions 60 x 30 x 30 cm fulfills these criteria. Six specimens can be kept there.

The substrate should be fine-grained (coarse sand, fine gravel) and, above all, not sharp-edged. If you have a coarser substrate, you should dig a small sandpit and feed it there. Some plants can also serve as spawning grounds.

As residents only close to the ground, metal armored catfish can be socialized with all other peaceful fish in the middle and upper aquarium regions. But be careful of fin biting like tiger barbs, which can harm the dorsal fins of these peaceful goblins.