It is the best known of our native ducks: the striking brown, beige and green colored mallards can be seen on almost all ponds, rivers, and lakes in parks.

Mallards belong to the family of ducks and there to the swimming ducks. This can be recognized by the peppy upward curving tail, which does not dip into the water when swimming. The tail coverts are black. The tail feathers shimmer blue. The belly is light. The webbed feet are bright orange.

During the breeding season, the males can be recognized by their iridescent green-colored head, the white ring around the neck, the brown breast, and the brown-beige-colored back. The females, on the other hand, look much simpler: They are simply mottled beige-brown. Outside the breeding season, the males also wear inconspicuous plumage: they are then also beige-brown to olive-colored.

However, they can always be recognized by the blue, black, and white feathers on the side of the body, the so-called mirror. The bill of the mallard is yellowish to orange. Mallards are the largest ducks living in our country: They grow up to 56 cm long and weigh between 700 and 1500 grams.

Where do mallards live? 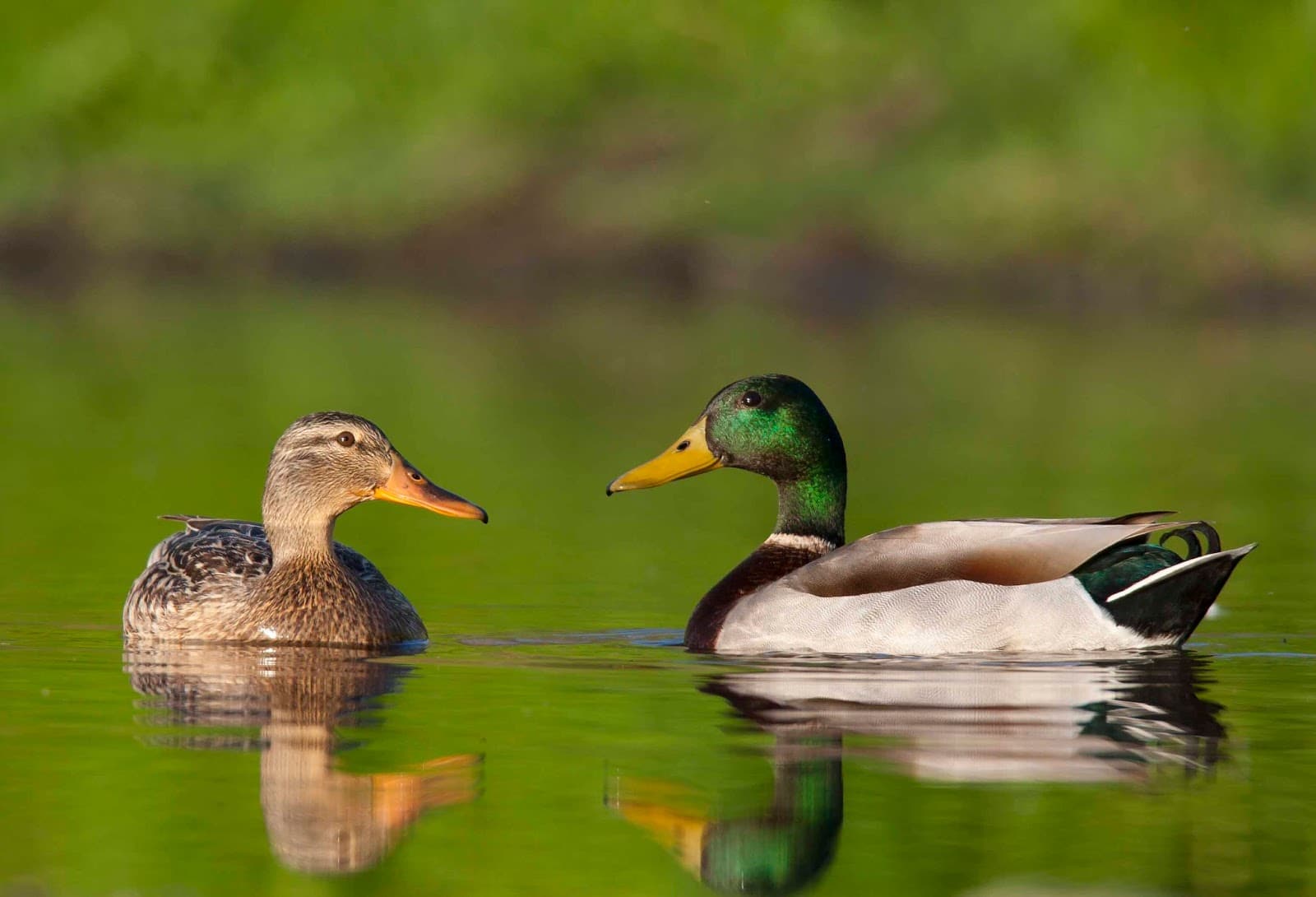 Mallards live in Europe, Asia, and North America. There they occur up to the tree line in the north and up to the steppe zone in the south. They are also at home in Iceland and Greenland. Where there is water, there are usually mallards: They live in standing and slow-flowing water and even make do with small ponds. Today they can be seen on the lakes in almost every park. In winter they sometimes migrate to sea coasts.

What species are mallards related to?

Mallards have many relatives, including teal, gadwall, widgeon, pintail, garganey, and shoveler. The mallard itself has six subspecies in different regions.

How old do mallards get?

Mallards can live 10 to 15 years. When living under human care, they are said to be able to live as long as 40 years.

How do mallards live?

Mallards are the wild ancestors of our domestic ducks: all the white ducks that are kept as livestock descend from these adaptable ducks. Mallards, whose plumage is spotted white, can often be seen at lakes. This is because mallards sometimes mate with domestic ducks that have escaped from their enclosures and settled with the mallards by lakes and rivers.

Sometimes, however, hybrid mallard ducks and domestic ducks live in the care of humans. Mallards are very social animals: they always live together in larger groups. However, unlike many geese, they do not form lifelong pairs. They only team up for one breeding season at a time. The males also do not care for the young: Shortly after the female lays the eggs, they move away. They then molt and form a group with other males.

Even if they belong to the group of swimming ducks, mallards can still dive. However, they do not come as deep as the diving ducks, but dive at most one meter deep into the water. This diving, in which they look for food on the water bottom, is called “gunddling”.

Friends and foes of mallards

Mallards can fall prey to predators such as foxes as well as birds of prey. However, their greatest enemy is man: Mallards are among the most popular hunting animals. Hundreds of thousands of them are shot by hunters every year. The females have a cunning tactic to protect their eggs: if they are chased away from the nest by enemies, they quickly spray the eggs with foul-smelling feces to scare away the attackers.

How do mallards reproduce?

Mallards look for a new mate every year, with whom they only stay for one breeding season. The mating season begins in autumn. The mating ritual can be observed well at the park lakes: First, the males shake themselves, appear to be preening their feathers, and then let the so-called “grunt whistle” be heard, raising their heads and bodies in the air.

They swim around the females while nodding their heads. When a female duck has chosen a male – called a drake – it swims alongside him and repeatedly points its head back over its shoulder. This mating ritual can be repeated several times. Before mating, the pair of ducks move away from the other ducks and bow to each other in the water for several minutes. Only then does mating take place, during which the drake holds the duck by the neck with its beak. Then both bathe and shake the water out of their plumage. 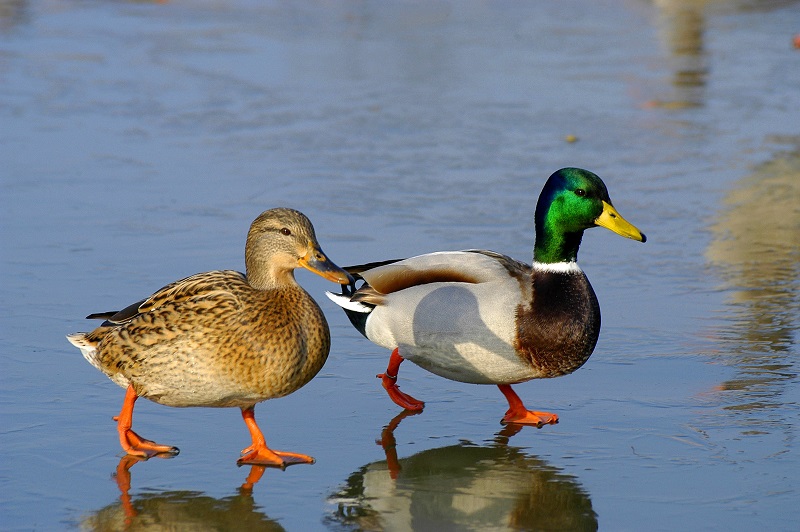 Mallards usually build their nests on the ground near the water, but sometimes far away. Eggs are laid between March and June. A female lays seven to eleven light brownish-green eggs that have a dull sheen and are incubated for 25 to 30 days. The young mallard ducks recognize their mother by a call that the mother makes as soon as the chicks hatch.

Mallard chicks are precocial: they leave the nest on the first day and are led by their mother. After 50 to 60 days, the little ones are independent. Unlike domestic ducklings, which wear yellow downy plumage, wild mallard ducklings are blackish-brown in color.

How do mallards communicate?

Everyone knows the loud croaking of mallards. The males croak from autumn to spring. During courtship, they make a high-pitched whistle that sounds like “fihbib”. The females call out “quak quak” all year round.

What do mallards eat?

Ducks are omnivores: They feed on many aquatic and bank plants, roots, seeds, but also snails, worms, and tadpoles. Sometimes they even eat small frogs. They often dig in the water to search for food. This means that they dive under with their head, neck, and forebody and look for food on the bottom of the water. The posterior and the tail protrude above the water.

The tame descendants of the mallards, the domestic ducks, are kept as livestock all over the world today. There are numerous breeds of them.