Koi come in all different colors and patterns, part of why the big carp are so popular. There are countless color variants that come together through different cultivated forms of the “basic types”. We want to explain these main colors to you here.

There are 13 koi classes, which can be divided into up to 200 individual breeding forms. With this precise description, the name can already give a clear picture of the individual Koi. It would of course be ideal to learn the Japanese vocabulary, which often clearly names the colors and character patterns. But since this is time-consuming work, it is often enough to know the most popular colors and to look up specialist sources if necessary.

The Group of “Gosanke” 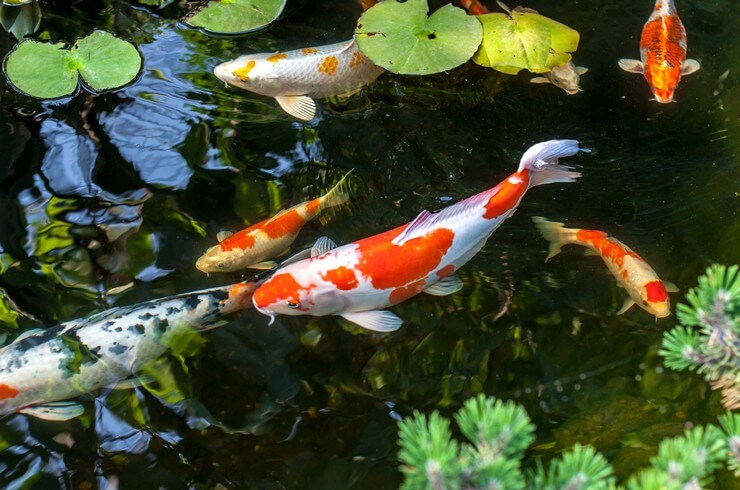 The three varieties that fall under this group are described as the “classic beauties”. They are particularly popular with koi lovers because they exude a fascinating elegance and clarity. The first Koi in this group is the Kohaku, a white Koi with red markings. This “beginner’s koi” is particularly valuable when the red color shines and the colors red and white are clearly separated from each other. The Tancho Kohaku are particularly popular: white koi with a circular, red spot on the forehead that resembles the Japanese flag.

The next Koi of the Gosanke is the Taisho Sanke or “Sanke” for short (by the way, san means three). These fish are white and red and black in color, but the head of the animal must not be black. As with the Kohaku, the color intensity determines the value of the Koi, the black should look like it was painted. Another characteristic of the Sanke is its fullness, which is more abundant than other varieties.

Last but not least is the Showa Sanshoku, which is called “Showa” for short. We find the same colors here as with the Sanke, but the black color can also be in the head area. In general, black areas are more common here than with Sanke, because black is the basic color here, not white. The Tancho Showa is particularly popular: the Showa has a red, circular spot on its head (this can also be streaked with black).

Next up is the Bekko Koi. These Koi are always two-colored and have black spots next to a white (Shiro), yellow (Ki), or red (Aka) basic color, which should be evenly distributed over the whole body. Here, too, the head must not be black. It should be mentioned that the Bekko is often confused with the Utsuri, but has a better body shape.

The just mentioned Utsuri (Utsurimono) is also a two-colored Koi, but it always has a black basic color. There are also three color variants with white (Shiro-Utsuri), red (Hu-Utsuri) and yellow (Ki-Utsuri). With Utsuri it is important that the respective color spots appear to be reflected like reflections.

Now we come to a variety that can vary greatly in appearance. All Koi that do not belong to any other race are called Kawarimonos. They result mainly from crossings of other koi colors and should be monochrome. The color variants are varied here, there are orange, yellow, ocher-colored, white, and brown koi. Only a metallic effect must not be present.

The next color variant is also monochrome but has the metallic effect just mentioned. All Ogon Koi have a metallic sheen and are most commonly white or yellow; other, darker color variants also occur. It is interesting here that the fish often turn dark in color at high temperatures: those that retain their golden shimmer with this temporary change in color are particularly valuable. 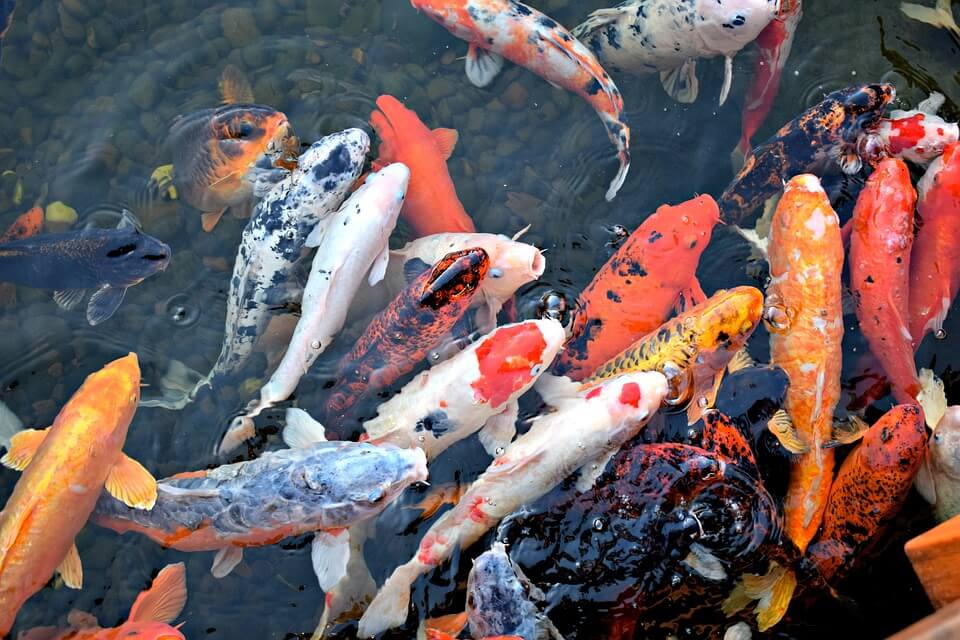 Next, we take care of the Asagi, which is one of the oldest cultivated varieties and is, therefore, the basis for many other cultivated forms. The back color of such an Asagi is blue (different shades of blue are allowed), but the head should be light blue and without any markings. At the base of the fins, you can find dark red or orange color, the belly, on the other hand, is milky white.

The next Koi is a real splash of color because matching its name (Goshiki means five) this Koi has up to five colors. During breeding, three-colored Sanke (red, white, black) were crossed with navy blue Asagi (blue and gray tones). This is where the professional often has to work because the darker colors are often not clearly delimited and therefore difficult to distinguish. Often the beauty of such a Goshiki only becomes apparent with increasing age, when the colors have developed completely.

The Doitsu is a specialty among the Koi: it either has no scales at all (then it is called leather carp) or only individual rows of scales that run along the back, for example. Doitsu is available in almost all color variants.

Finally, we want to introduce Kingirin, who describes all Koi that have glitter scales. If you think of the children’s book “The Rainbow Fish”, you are wrong: Individual scales on these fish have the popular diamond pattern effect, in which the sunlight is strongly reflected. Often times they are simply described as “ginrin”.