Play, fun, and hunting instinct, the Kerry Blue Terrier is a charming yet serious companion with typical terrier toughness. His lively character, intelligence, and willingness to work make the bearded Irishman an attentive four-legged friend. If you lead an active lifestyle, have experience with dogs, and spend a lot of time outdoors, Kerry Blue is a suitable companion dog. 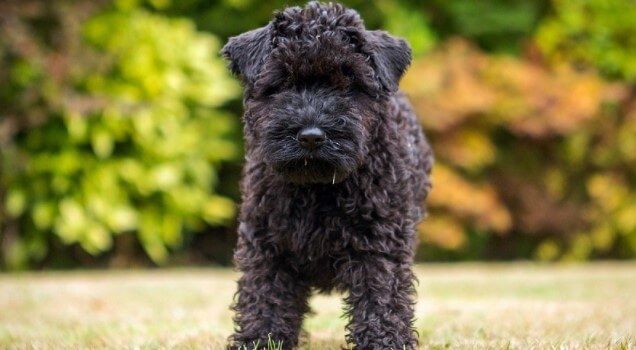 Legendary Terrier as a Mascot

There are many legends about the origin of the Kerry Blue Terrier. The breed was not mentioned as such until the 19th century, but where it came from is unknown. According to legend, the ancestor of the entire Kerry Blue breed was a male Spaniard who arrived in Ireland on the Spanish Armada that sank off the coast of Kerry. There he killed all the males he met and produced many offspring. Similar is the legend of the Russian Blue, which is said to have entered Tralee Bay from a sinking Russian ship. Those who prefer less drama can look for Kerry’s ancestors in soft-coated Irish Wheaten Terriers, Irish Terriers and Gathers, now extinct Sheepdogs.

Centuries before the breed was officially recognized, the Kerry Blue was a popular companion and hunting dog. Irish hunters preferred Kerry Retrievers, Setters, and Retrievers. It protected the home yard from rats and was even used to protect against badgers and otters. However, over the past 150 years, he has completely lost his duties as a working dog. In the last century, he was very popular as a mascot of Irish patriots. Today, the Kerry Blue Terrier is considered a rare, charming, and demanding companion dog.

Personality of the Kerry Blue Terrier

A look at his varied tasks in the past and his role in hunting badgers, otters, and other predators quickly makes it clear that the Kerry Blue lives up to its name as a terrier. It brings firmness, courage, and perseverance. He doesn’t know how to give up. High energy levels, constant alertness, and a desire to do something make this breed demanding to keep.

Kerry Blue Terriers are closely related to their people. Compared to other terrier breeds, they are considered fairly easy to train and handle if you already have some experience with dogs. They bring with them a fair amount of the “will to pleasure”—the desire to please. The typical Kerry Blue Terrier also has the power to give commands. Therefore, it may happen that he stops doing exercises that are boring to him. However, with the right motivation, the savvy Irishman turns out to be a tireless worker. He wants to be busy. When bored, he finds a challenge for himself, such as increased vigilance. This breed is known to bark.

Terrier without hunting instinct? In any case, Kerry Blue does not offer this. On the contrary, he is very interested in cats, small animals, and everything else that falls to his prey. However, due to its good handling, you can train it to stay accessible. Kerry Blue has the patience of an angel with people, especially children when they are properly socialized. He willingly plays with you for hours, and then goes for a run with you. However, when meeting unfamiliar dogs, one must be careful: adult males tend to consider their presence unnecessary.

It is always difficult to keep and train a terrier, this also applies to the Kerry Blue. If this is your first time getting a dog, it is highly recommended that training be supervised by an experienced trainer. Good socialization is the basis for taking your dog with you wherever you go. Terriers are especially important to teach how to properly handle other people’s dogs. Practice this with him, for example in puppy playgroups offered by many film schools. As a terrier owner, you should also be on the lookout for possible hunting or aggressive behavior in your four-legged friend at an early stage. Strong characters don’t let themselves be fooled but tend to control other dogs. 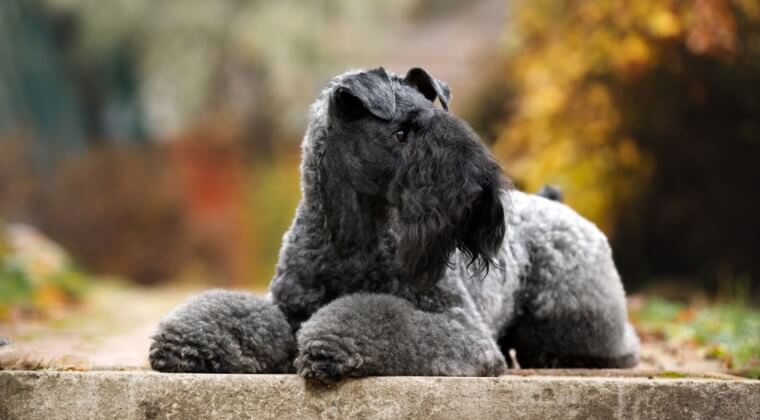 When raising a puppy, remember two principles: be consistent and fair. Smart Terriers love to test their limits and need strict rules in their daily lives from the first day they move in. Because they think and act independently, it’s important to get them on your side as early as possible. Terriers often have early and very pronounced puberty when they unfurl their ears. Even if the hood worked well before, now is the time to pull out the towline. The good news is that, like most terriers, the Kerry Blue is quite precocious and already very mature by the age of two.

When you live together in an apartment, it’s important to keep your Kerry Blue Terrier busy both physically and mentally. A home with a garden that Kerry Blue is allowed to guard is well suited to this breed. But make sure you have a high and secure fence. Many Kerries love to dig: flowerbeds and fences are especially interesting in a home garden!

Caring for the Kerry Blue Terrier

The Curly Irishman has a tough, waterproof coat that does not shed. However, it is considered to require special care because you have to comb the fur regularly and trim it every few weeks. A long beard needs special attention: when fed with wet food, it tends to stick together and needs daily brushing. Remove hair from the eyes, ears, and paws and remove any tangles on the legs at an early stage.

The Kerry Blue Terrier has long been on the list of rare dog breeds. With multiple litters, emphasis is placed on very healthy breeding with properly vetted animals. Well-known hereditary diseases include hip and elbow dysplasia, which occurs in almost all medium and large breeds. Eye diseases such as cataracts or dry eyes also occur. In general, the Irish dog breed is considered to be robust.