The Japanese Chin has been one of the most popular pet dogs for centuries. Not only Japanese emperors, but also Queen Victoria enjoyed the company of these affectionate and pleasant companions. Today, the “Chin”, as breed lovers like to call it, is no longer a privilege of the nobility. For people with limited space who can only walk a little but want their dog with them at all times, the Japanese Chin is the perfect companion dog. 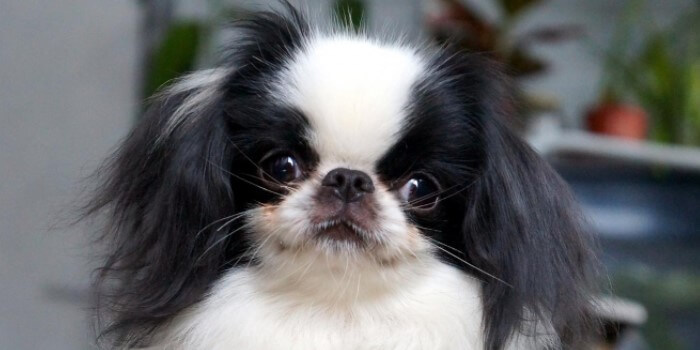 From Royal Lapdog to a Beloved Companion

The origin of this unusual breed of companion dog is no longer completely clear, but historians speculate that the ancestors of the later Japanese Chins came to Japan as a gift from the ruling family from North Korea and China. Dogs were correspondingly valuable then and have remained so for centuries. Only the nobles were allowed to keep and breed these little furballs. Various breeding lines were formed, which were early affected by hereditary diseases due to constant inbreeding and constantly targeted reduction in the size of animals. However, thanks to the crossing of some spaniels and the regular exchange of breeding animals, the dog breed has stabilized over the years.

It wasn’t until the 18th century that a Japanese ruler revealed the secret of the Japanese Chin by gifting seven of these dogs to a European trader. Only two of them made it to England, where they accompanied Queen Victoria. Since then, the Japanese plush dog has become the most popular pet dog among the European nobility. Their friendly, loyal and cuddly nature makes their hearts fly to this day. An adorable dwarf is the right choice for first-time dog owners, families with older children, people with little space in the home, or seniors who can no longer take long walks.

Nature of the Japanese Chin

The Japanese Chin is a cheerful, affectionate, and intelligent little dog that gets along well with most bipedal and four-legged friends. However, anyone who keeps small animals such as rabbits should be careful: some breeding lines have a noticeable hunting instinct. Dwarves, on the other hand, don’t act particularly vigilant or even defensive.

Fluffy lap dogs bond very closely with their people. They tend to be shy and reserved with strangers and visitors, but never aggressive. It is important to give them enough room to evade when meeting strangers. Due to their otherwise small size, they quickly feel under pressure. They show that they are overwhelmed by growling and clicking. Caution is especially important when working with young children because small dogs have a high risk of injury.

The close connection with the local population means that many Japanese Chins do not want to be left alone. This must be taken into account when buying. Due to their small size – in Japan, midgets were sometimes worn in kimono sleeves – Japanese Chins can accompany you almost everywhere. However, if this is not possible, a Plan B with experienced support is needed.

You shouldn’t underestimate the intelligence of the Japanese Chin: they are smart little dogs who enjoy learning doggy tricks, playing, and exploring their environment. However, due to its size, you must properly protect your four-legged friend from larger dogs in the open, even if they are well socialized.

An interesting aspect of this breed’s personality is its often feline nature: Japanese Chins wipe their muzzles with their front paws and rub their heads against curtains or sofas like cats. Even their stubbornness and graceful demeanor resemble those of a cat.

Small dogs create different but no fewer problems than big furry friends. Basically, even a small dog like the Japanese Chin needs to be properly trained. He should not be allowed to do anything that he is not allowed to do like the larger dog in the household. If you don’t pay attention to it, you will quickly become a little four-legged dictator who brazenly defends his place on the couch and shares food with you without asking. An important stage of socialization and education begins as soon as you move. New dog owners should seek help from a kennel school early on, even if the chin is so tiny. Many film schools offer special playgroups for small breed puppies so they can learn social behavior from scratch. 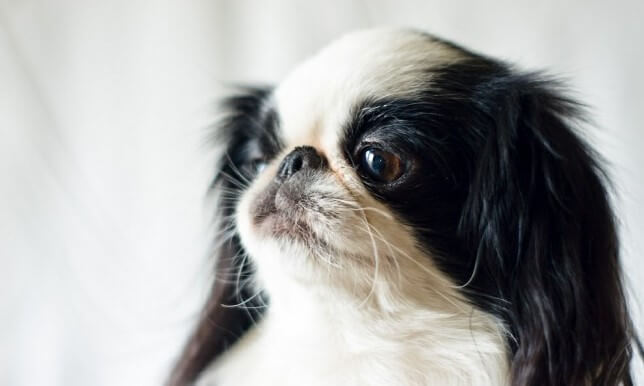 It is impossible not to mention that the Japanese Chin, like many small dogs, is difficult to train at home. In no case should you put “puppy pads” on a puppy or a young dog, that is, absorbent pads, so that he can do his own business in the house. A small bladder can’t hold much, so a Chin puppy needs frequent breaks to urinate. With the size of your apartment, little Japanese are not demanding: they will find a suitable place even in the smallest hut.

The silky soft coat of the Japanese Chin is easy to care for. Brush daily to avoid tangles, ears, legs, belly, and tail are especially prone to tangling. Large, round eyes are prone to tears and require a little more attention when grooming.

This Japanese dog breed, previously genetically limited by inbreeding, today has a large number of breed-typical diseases. These include eye diseases such as progressive retinal atrophy, droopy eyelids, eye masses, and cataracts. However, there are also diseases of the musculoskeletal system, such as dislocation of the patella or changes in the spine.

Like most small dogs, these dwarfs tend to gain weight. So make sure you eat a healthy diet with the right amount of energy per day. With good care, Japanese Chins can live up to twelve years.