The social Japanese Bobtail usually doesn’t want to be alone for long periods of time. It is therefore advisable to buy a second cat if the velvet paw is to be kept in the apartment. She is happy to have a garden or a secured balcony. The Japanese Bobtail is an active cat with a calm demeanor that likes to play and climb. Since she is very willing to learn, she often does not find it difficult to learn tricks. In some cases, she can also get used to the harness and leash.

A cat with a short tail and a gait that is more like a hobble? Sounds unusual, but it is a typical description for the Japanese Bobtail. In many Asian countries, cats with such a “stubby tail” are considered to be a good luck charm. Unfortunately, this often leads to the mutilation of the animals.

Contents show
1 But how did the short tail of the Japanese pedigree cat come about?
2 Breed-specific temperament traits
3 Attitude and care

But how did the short tail of the Japanese pedigree cat come about? 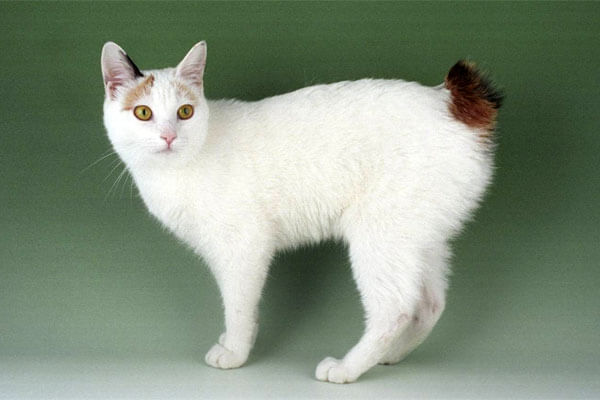 Legend has it that a cat once ventured too close to the fire to warm itself. In doing so, her tail caught fire. While escaping, the cat set many houses on fire, which burned down to the ground. As a punishment, the emperor ordered all cats to have their tails removed.

How much truth there is in this story cannot of course be proven – to this day there is no evidence of when and how the cats with the short tails first appeared. However, it is believed that the cats came to Japan from China over a thousand years ago. Finally, in 1602, Japanese authorities decided that all cats should be free. They wanted to counteract the rodent plague that threatened the silkworms in the country at the time. Selling or buying cats was illegal at the time. So the Japanese Bobtail lived on farms or in the streets.

The German doctor and botanical researcher Engelbert Kämpfer mentioned the Japanese Bobtail around 1700 in his book on the flora, fauna, and landscape of Japan. He wrote: “Only one breed of cats is kept. It has large patches of yellow, black, and white fur; its short tail looks twisted and broken. She shows no great desire to hunt rats and mice, but wants to be carried around and stroked by women ”.

The Japanese Bobtail did not arrive in the United States until 1968 when Elizabeth Freret imported three specimens of the breed. The CFA (Cat Fanciers Association) recognized them in 1976. In Great Britain, the first litter was registered in 2001. The Japanese bobtail is known around the world primarily in the form of a waving cat. The Maneki-Neko represents a seated Japanese bobtail with a raised paw and is a popular lucky charm in Japan. Often she sits in the entrance area of ​​houses and shops. In this country, you can discover the Maneki-Neko in the shop windows of Asian supermarkets or restaurants. 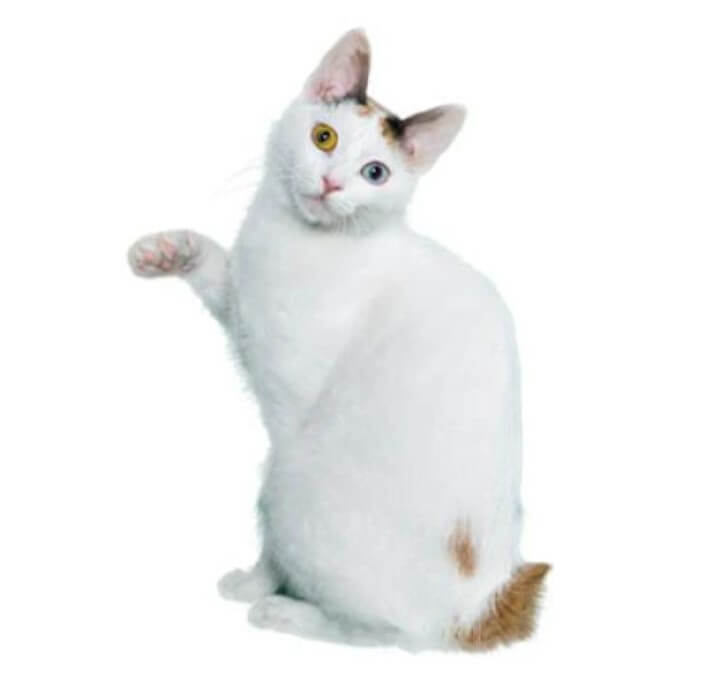 The Japanese Bobtail is considered to be an intelligent and talkative cat with a soft voice. If they are spoken to, the short-tailed chatterboxes like to have real conversations with their people. Some people even claim their voices are reminiscent of singing. The kittens of the Japanese Bobtail are described as being particularly active at an early age. Her great willingness to learn is also praised in various places. Hence, she is considered receptive to learning various tricks. Some representatives of this breed also learn to walk on a leash, however, as with all cat breeds, this differs from animal to animal. 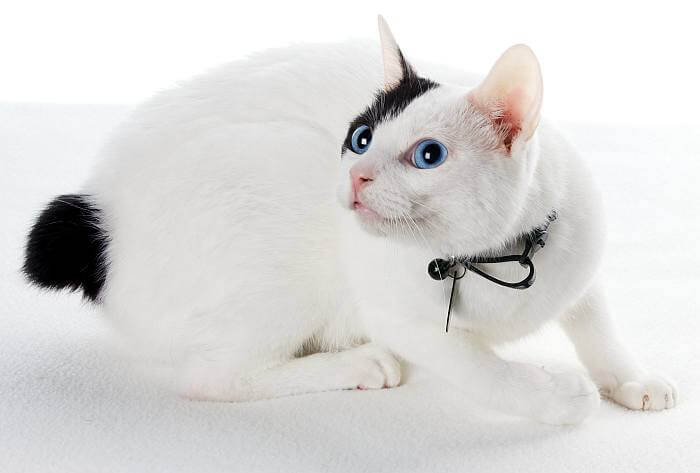 The Japanese Bobtail usually does not require any special care. Their short coat is rather undemanding. However, occasional brushing will not harm the cat. In contrast to other tailless or short-tailed breeds, the Japanese Bobtail is not known to have any hereditary diseases. Because of her affection, the sociable puss shouldn’t be left alone for too long. If you only keep an apartment, working owners should therefore think about buying a second cat. Free movement is usually not a problem with the Japanese Bobtail. It is considered to be robust and less prone to disease. She usually doesn’t mind cooler temperatures either.