Jackals belong to the canine family and look like a cross between a wolf and a fox. With their long legs, they can run incredibly fast!

Jackals are predators. Depending on the species, their body is 70 to 100 centimeters long and they weigh seven to 20 kilograms. They have erect, triangular ears, a pointed snout, and long legs. The golden jackal is colored somewhat differently depending on the distribution area. Its fur varies from golden brown to rusty brown to greyish. The black-backed jackal is red-brown on the belly, the flanks are slate-brown and the back is set off dark like a saddle pad. It has larger ears than the other two species and longer legs than the golden jackal.

The striped jackal is brownish-gray in color and has stripes on its flanks. The tip of the tail is white. It has relatively small ears and even longer legs than the black-backed jackal. The Abyssinian jackal is reddish in color, with a white abdomen and legs. Golden jackal and Abyssinian jackal are the largest jackals, black-backed and striped jackal are slightly smaller.

Where do jackals live? 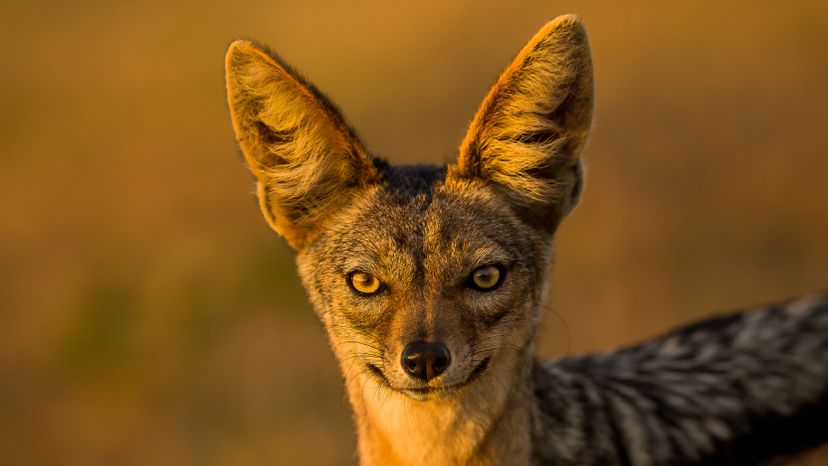 The golden jackal is the only one of the jackals that also occurs in Europe. It is distributed in south-eastern Europe and Asia: in Greece and on the Dalmatian coast, through Turkey, from Asia Minor to India, Burma, Malaysia, and Sri Lanka. In Africa, it lies north and east of the Sahara to Kenya.

A golden jackal was even sighted in Germany a few years ago. The black-backed jackal lives in East Africa from Ethiopia to Tanzania and Kenya as well as in southern Africa. The striped jackal is found in sub-Saharan Africa to South Africa. The Abyssinian jackal is found in Ethiopia and eastern Sudan. Golden and black-backed jackals live mainly in grass steppes, but also in savannas and semi-deserts. They love open country and avoid thick bushes.

Striped jackals, on the other hand, prefer areas rich in forest and bushes. The Abyssinian jackal inhabits treeless regions at an altitude of 3000 to 4400 meters.

What types of jackals are there?

The golden jackal, on the other hand, is more closely related to other species of the genus such as the wolf or coyote.

How old do jackals get?

Jackals live to about eight years in the wild and 14 to 16 in captivity.

How do jackals live?

All jackal species are quite similar in behavior and lifestyle. However, the striped jackal is shyer than the other two species. Jackals are social animals and live in family groups. Neighboring family groups avoid each other. An adult pair, which usually stays together for life, forms the center of the group, which includes the young from the last litter and mostly females from older litters. Male cubs leave the group when they are one year old.

There is a clear hierarchy within the family association. The male leads the family, sometimes the female as well. Young jackals play a lot with each other at first, as they get older they get wilder with each other, but injuries rarely occur. Jackals colonize territories that they aggressively defend against other family groups. In these territories, they live in several small burrows or in burrows that they take over from other animals or sometimes dig themselves.

Friends and foes of the jackal 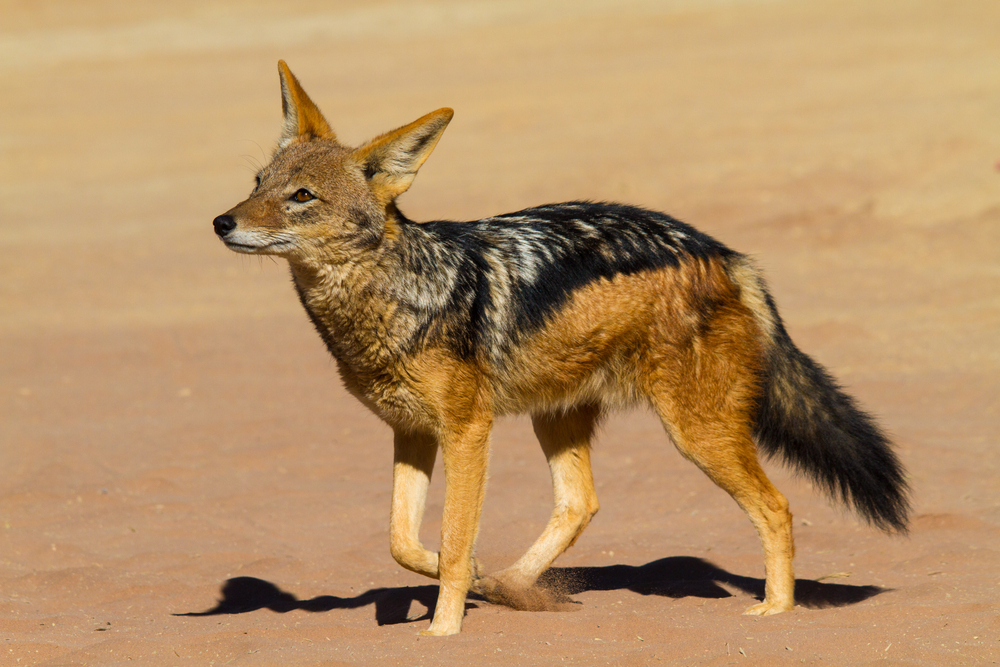 Young jackals can become dangerous to larger predators such as birds of prey or hyenas. Adult jackals can be prey to leopards. The greatest enemy of the golden jackal is the wolf in some regions.

How do jackals reproduce?

As the breeding season approaches, the male stays with his female all the time. After a gestation period of 60 to 70 days, the female gives birth to three to eight young. Usually only three or four survive. The young are blind at birth and have a dark brown coat. After about a month they change their fur and are then colored like adult animals. After about two weeks, they open their eyes, and after two to three weeks they begin to eat solid food in addition to their mother’s milk. This food is pre-digested by the parents and regurgitated for the young.

In addition to the female, the male also takes care of the young from the beginning and protects his family from any intruders. When the young are larger, the male and female take turns hunting and caring for the young and the partner who stayed behind.

At five to six months, the boys are independent but often stay with their families.