Many cats are pretty good at hiding their pain. Facial expressions, behavior, and posture can still provide clues as to whether your cat is suffering – even if it is not walking around loudly meowing around.

Of course, nobody wants their own cat to suffer. Unfortunately, sometimes it is not easy to correctly identify the signs of pain in a cat. Because: cats are masters at hiding!

Why is that? The tendency to hide their pain is believed to date back to the wildcat era. Sick or injured animals were easier prey for predators. Therefore, a weak wildcat not only made itself more vulnerable but also risked being rejected by its fellow cats and left behind.

Sure, this risk no longer exists today. After all, you would of course take care of your kitty self-sacrificingly even if she openly shows her pain, right? However, this behavior is a deep instinct of your cat, which even centuries of coexistence with humans have apparently not erased.

According to Hill’s Pet, your cat may also see other kitties – or even people – in the house competing for water, food, and affection and will not want to show weakness towards them.

Contents show
1 Is My Cat Suffering? This is How You Recognize It
2 The Facial Expression Shows Whether a Cat is Suffering
3 Never Give Your Cat Ibuprofen!

Is My Cat Suffering? This is How You Recognize It 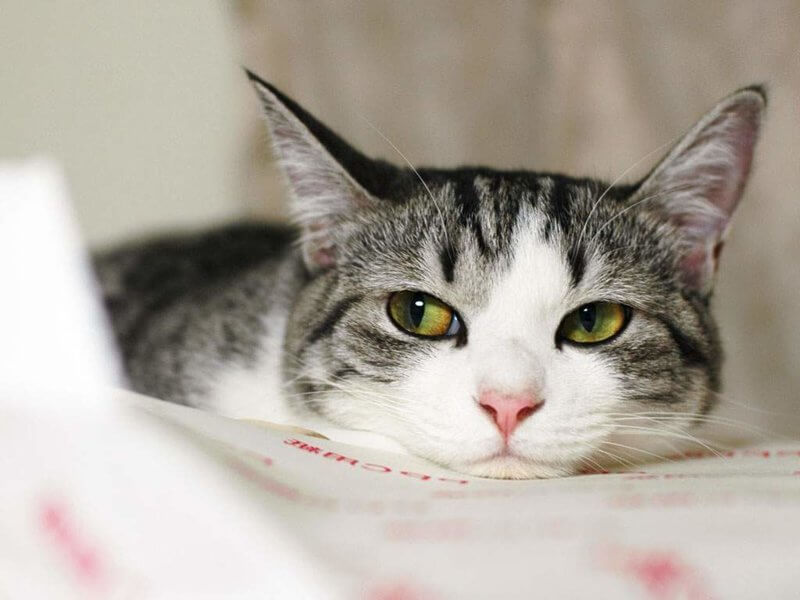 Even so, there are some behavioral patterns that could suggest that your kitty is suffering right now. According to the magazine “Catster”, you should pay particular attention to the following symptoms in your cat:

Other signs of pain in cats include lameness, loss of appetite, constant tail flapping, and increased urination. Your cat could exhibit all of these behavior patterns because certain movements or touches cause them pain.

The Facial Expression Shows Whether a Cat is Suffering

The “Feline Grimace Scale” – literally translated: cat grimace scale – assigns the facial expressions of the velvet paws to certain pain levels. For example, in most of the cats observed, lowered ears, narrowed eyes, and drooping whiskers were common signs of acute pain.

According to the authors, the scale was developed specifically for veterinarians. But she can also help cat owners to assess when the cat is not doing well and needs to see the vet.

Never Give Your Cat Ibuprofen!

Important: If you suspect your cat may be in pain, take him to the vet immediately. He or she may also prescribe pain reliever medication. You should never give your kitty painkillers that are actually for people!

Your cat’s pain may be due to injury, illness, or chronic pain from arthritis or osteoarthritis. When you come back from the vet with your cat, you should therefore make its environment as comfortable as possible.

Make sure she can get to her bed, food bowl, and litter box easily. Also, try to make sure that other animals or children in the house aren’t too rude to the suffering kitty. When in doubt, she brings herself to safety. But it doesn’t hurt to spare her any stress and pain in advance.