If you want a special eye-catcher in the aquarium, you should think about crabs. They are fascinating creatures that come in a wide variety of species and many of which are unknown. Here we introduce you to the shellfish and give you an insight into the exciting world of crabs. 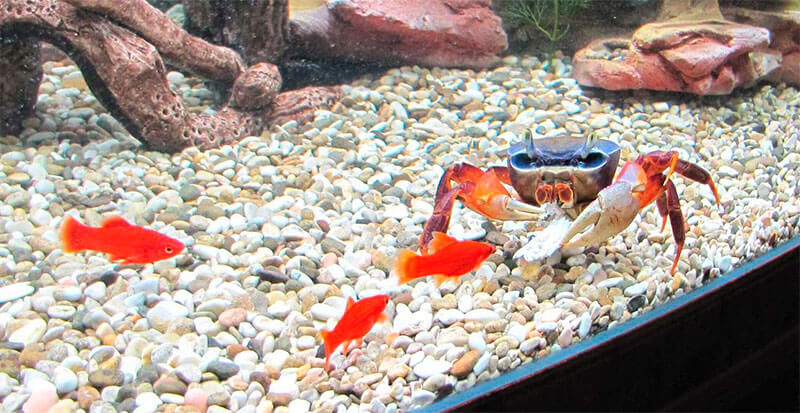 Crabs (“Brachyura”) form the most species-rich order within the decipod with more than 5000 species. Most of them live in the sea, some have also made freshwater their home or have even moved to the land and only come back to the water to reproduce. It is typical for them that the abdomen is folded down under the head armor. Inside their body, they have a series of tiny legs that help transport the eggs and allow them to breathe.

Algae Eaters From the Caribbean

The green emeraldo crab (“Mithraculus sculptus”) can reach a body width of up to about six centimeters and is a green image of the stereotypical crab. It is great for the aquarium because firstly it eats away unwanted algae and is also diurnal. It is easy to observe and also keeps the aquarium clean.

The Sally light-foot crab also comes from the Caribbean. With her, the name says it all, because this racing crab sprints through the aquarium all day and also grazes off algae. But it is also able to get out of the water for a short time: If the aquarium is not safely covered, it can break out. Watching it is particularly interesting because it has an unusually flat body and can reach a width of up to 12 cm.

Boxer crabs (“Lybis tesselata”) are extraordinary small crabs. The animals, which measure no more than two centimeters, carry two tiny anemones from the genus Triactis with them. These are used to defend against possible attackers: the crab stretches its anemones at its opponent like a pair of boxing gloves. The anemones are very sticky and are therefore also used to obtain their food. When molting, the boxer crab deposits its small anemones in a sheltered place and takes them up again after molting.

Porcelain crabs are counted among the medium crabs and are scientifically not “real” crabs. These diurnal animals are often kept in pairs and reach a body size of around three centimeters. They like to share their anemone with a pair of clownfish. The crabs live on the foot of the anemone, the clownfish live on the upper floor. This cohabitation between the crabs brings neither advantages nor disadvantages to the other partner and is therefore referred to as carpose or probiosis.

In contrast, the coral crabs of the genus Trapezia live between the very strongly branched branches. These little crabs enjoy the protection that the coral offers. These corals release mucus and leftover food, which the coral crabs eat as food. In return, the crabs rid the corals of parasites.

Imports From All Over the World 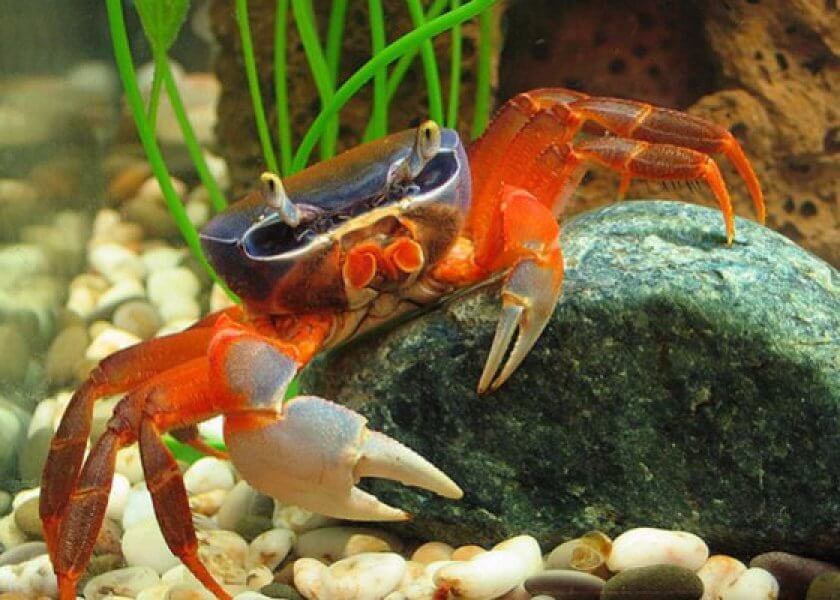 The strawberry crab is often imported from Hawaii and usually lives in the Indo-Pacific region. It grows up to 5 cm and is relatively expensive in specialist shops. The pretty, pink crab is very shy and spends most of its time under stones. It rarely comes out during the day and is, therefore, more suitable for nano aquariums. When keeping it, it should be noted that it must not be kept together with predators, otherwise, the defenseless crab will become prey itself.

Another type of sea knight would be the ghost crab. You can recognize them by their leg span of up to 30 cm. It is diurnal and is considered peaceful. Furthermore, it hunts for the most unpopular bristle worms and is therefore classified as a beneficial organism that prevents the bristle worms from multiplying.

Woolly crabs often move into the aquarium unintentionally, as they are sometimes hidden in “living” reef rocks that have been bought for decoration. They build caves in such stones and when they are very small they are often overlooked. Their appearance can be described as “furry” and often you cannot tell where the front and back are. However, if you offer them a piece of food, that changes quickly. They are very interesting creatures in terms of observation and care.

The last crab listed is arguably the most bizarre of them all: the ghost arrow crab. It was originally imported from the Philippines (Cebu Island) and lives there on sandy soils that go down to a depth of 1000 meters. It feeds on all sorts of organic substances. In the aquarium, the ghost arrow crab is buried in the coral sand substrate most of the time. You can often only see her head with her antennae, the rest is buried in the sand with her pairs of legs.