At least since the polar bear, Knut became famous, polar bears have been at the top of people’s sympathy scale. However, the predators are under threat in their natural habitat.

Polar bears are predators and belong to the giant bear family. Alongside the Kodiak bears of Alaska, they are the largest land predators. On average, the males are 240 to 270 centimeters long, about 160 centimeters high, and weigh 400 to 500 kilograms.

Males standing on their hind legs measure up to three meters. In the Siberian Arctic, some males grow even larger because they eat a particularly thick layer of fat. The females are always smaller than the males. Polar bears have the typical physique of a bear. However, their bodies are longer than their closest relatives, the brown bears.

The shoulders are lower than the back of the body, the neck is relatively long and thin, and the head is quite small in relation to the body. Typical are the small, round ears. The feet are long and wide with thick, short, black claws. They have webbed feet between their toes.

The dense fur of polar bears is yellowish-white in color, lighter in winter than in summer. The soles of the feet are also densely hairy, only the balls of the feet do not have any fur. The black eyes and black nose stand out clearly against the white head.

Where do polar bears live? 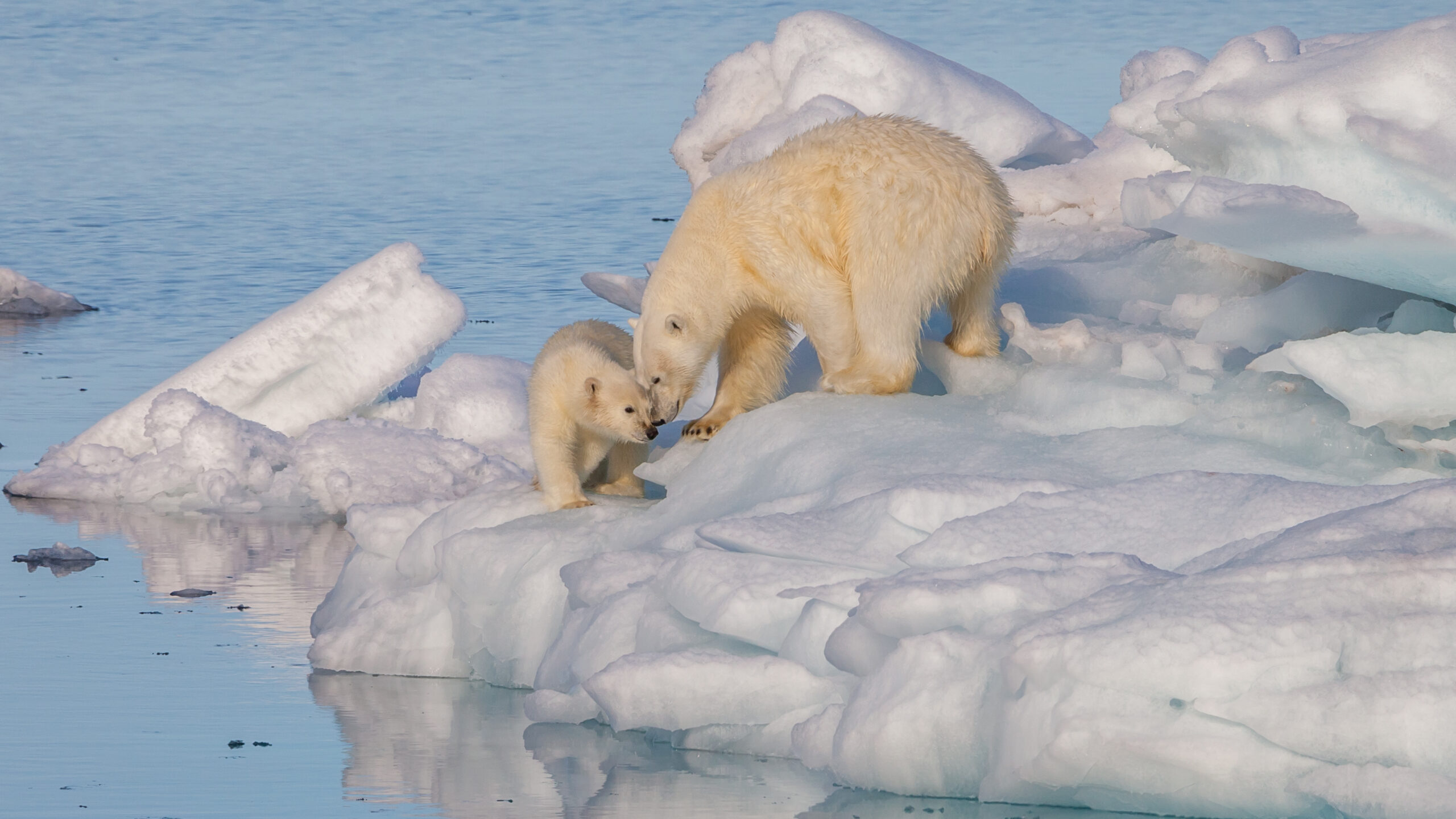 Polar bears are only found in the northern hemisphere. They are at home in the arctic regions of Europe, Asia, and North America, i.e. from Siberia and Svalbard to Alaska and the Canadian Arctic to Greenland. In the Arctic, polar bears live mainly in the southern part of the drift ice region, on the islands, and on the shores of the Arctic Ocean. There, the wind and sea currents ensure that there are always enough open water points in the ice for polar bears to hunt.

In winter, the bears move further south. Pregnant females spend the winter in snow caves, the males also move around in winter and only dig into a snow cave for a while in extreme cold. But they don’t hibernate.

What species are polar bears related to?

The polar bear’s closest relative is the brown bear.

How old do polar bears get?

In the wild, polar bears live an average of 20 years.

How do polar bears live?

The polar bear’s dense fur works like a thermal jacket: the hair, which can be up to 15 centimeters long, is hollow, creating an air cushion that protects the animals from the cold. And because the skin underneath the fur is black, it can store the sunlight transmitted through the hollow hairs to the skin as heat.

A layer of blubber several centimeters thick also helps to ensure that the polar bears don’t get cold even in the iciest of storms. Thanks to their small ears and hairy soles, they hardly lose any body heat. Because of the fur on their feet and the webbed feet, polar bears can walk on the snow like snowshoes without sinking in.

The only hairless places – apart from the nose – are the balls of the soles of the feet. They are also black: The animals can use them to store heat particularly well, but they can also give it off if they get too warm.

Polar bears can’t see very well, but they can smell very well. Their keen sense of smell helps them spot prey from a great distance. Polar bears are solitary for most of the year. They have large territories, which they do not mark and hardly defend.

If there is enough prey, they will also accept members of their own species in their vicinity. On land, they can run long distances and reach speeds of up to 40 kilometers per hour. And they can jump over ice crevices up to five meters wide.

Polar bears are very good swimmers and can cover long distances in the water from island to island or from the drift ice areas to the mainland border. They can dive for up to two minutes. Because the water runs off their fur very quickly, they hardly lose any body heat even after a swim in the sea.

Friends and foes of the polar bear

Adult polar bears are so large and strong that they have almost no natural predators. However, young polar bears often fall victim to adult male polar bears. The biggest enemy of polar bears is humans. The large predators have always been hunted for their fur.

How do polar bears reproduce?

The polar bear mating season runs from April to June. Only in this phase do males and females come together for a short time. The males use their keen noses to pick up the tracks of female bears, and violent fights often ensue between males fighting over a female. After mating, the bear and the she-bear go their separate ways. The pregnant females dig a snow cave made up of several chambers in October or November. The females remain in this cavity throughout the winter.

Because they don’t hunt during this time, they have to live off the fat deposits they have eaten up beforehand. After a gestation period of about eight months, the bear gives birth to her cubs in this cave, usually two cubs. At birth, babies are only 20 to 30 centimeters tall and weigh 600 to 700 grams. 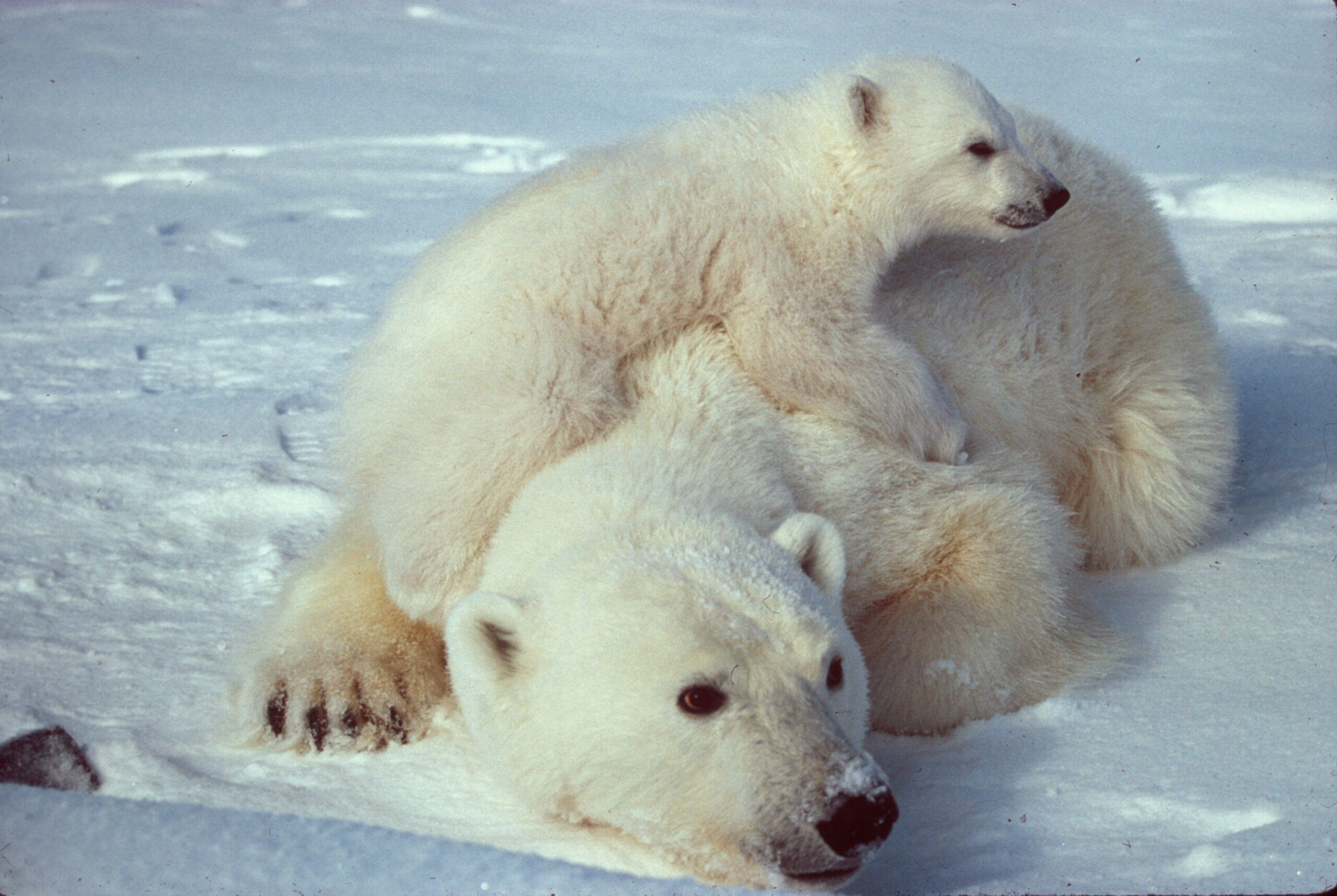 They are still blind and deaf, have little hair, and are therefore completely dependent on their mother’s care. They remain in the cave until the following spring, are suckled by their mother, and grow rapidly. In March or April, together with their mother, they leave their hiding place and migrate to the sea.

How do polar bears hunt?

With their yellowish-white fur, polar bears are perfectly camouflaged in their habitat and are therefore very successful hunters. When hunting, polar bears usually lurk for a long time at the breathing holes of seals. There, the prey repeatedly stretches their heads out of the water to breathe. The lurking polar bear then grabs the animals with its huge paws and pulls them onto the ice.

Sometimes polar bears will slowly approach seals sunbathing on the ice on their bellies and kill them with a swipe of their paws.

Thanks to their fine sense of smell, they can also track down the female seals’ snow caves, in which they give birth to their young. The bears then drop onto the cave with the full weight of their front body, crush it and capture the seals.