Hotspots are common in dogs. Dog breeds in particular that have a thick, long coat are often affected by skin disease. If the dog starts to scratch, the skin should always be checked for superficial, inflamed areas in order to be able to start treating the dog’s hotspots quickly. You can find out everything about hotspots in dogs in this article.

Contents show
1 Hotspots (Dog): Disease Profile
2 Hotspot in the Dog – What is It?
2.1 What hotspots are there in dogs?
3 Is a Dog Hotspot Dangerous?
4 Which Dogs Are Most Commonly Affected by Hotspots?
5 On Which Parts of the Body Do Hotspots Form in Dogs?
6 The Dog Has a Hotspot – an Overview of Typical Symptoms
7 Where Does a Dog Hotspot Come From?
8 Cause – How Does a Hotspot Develop in Dogs?
8.1 Causes:
8.2 What Happens In the Skin During a Hotspot?
8.3 Example of clinical images of a hotspot in the dog
9 Diagnosis and Detection of Hotspot in Dogs
10 What Investigations Should Be Carried Out to Find Out the Cause?
11 What Can You Do About the Dog’s Hotspot?
12 Hotspot in the Dog – Treatment
12.1 Local treatment
13 Can a Dog Hotspot be Treated with Home Remedies?
14 Treatment with Laser Irradiation and Quartz Lamps
15 Prophylaxis – Can Dogs be Protected From the Inflammation?
16 Grooming to Avoid Hotspots
17 Healthy feed
18 Protection against ectoparasites
19 Treatment already at the beginning of a hotspot 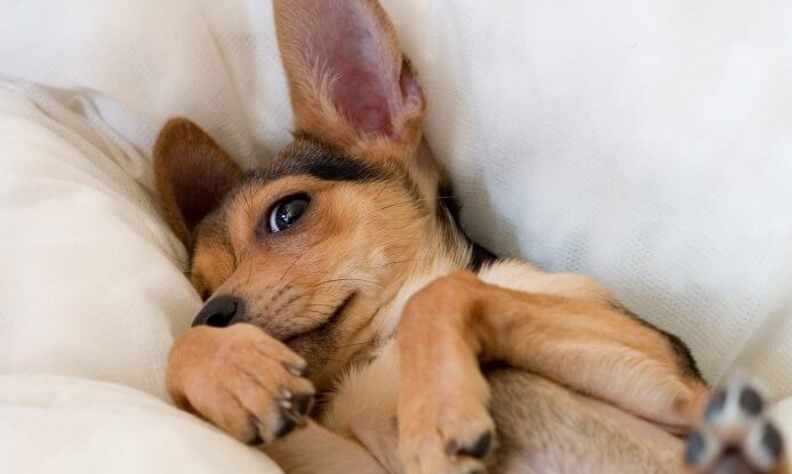 Hotspot in the Dog – What is It?

Hotspot means “hot spot”. This red, mostly round area is an inflammation of the top layer of skin that, if left untreated, will spread deeper and deeper into the skin.
A hotspot in dogs is not a specific disease, but a symptom that occurs as a side effect of another disease. The causes that trigger a hotspot in dogs are correspondingly diverse.

What hotspots are there in dogs?

Is a Dog Hotspot Dangerous?

Bacteria settle in a deep hotspot in the dog, causing a purulent inflammation. If the germs break into the bloodstream, they spread to the internal organs and cause sepsis. If the purulent inflammation spreads under the skin, areas of the skin die off. Toxins are released that damage the dog’s heart, liver, and kidneys.

Which Dogs Are Most Commonly Affected by Hotspots?

The superficial and deep dermatitis often occurs in dogs with long fur or heavily developed skin folds, such as the Golden Retriever.

On Which Parts of the Body Do Hotspots Form in Dogs?

Most often, the skin changes begin on the dog’s body. The legs, back, and neck are all affected. Other hotspots occur in the area of the ears and on the nose. If the dog scratches itself again and again due to the severe itching, dermatitis under the fur will spread to the entire body.

The Dog Has a Hotspot – an Overview of Typical Symptoms

The superficial hotspot is a round, red spot that weeps easily. The dog’s fur is stuck together in the area of the hotspot. The red spot is delimited from the surrounding skin by a clear border.

The dog scratches. If there is a deep hotspot, there is purulent inflammation. The area of ​​dermatitis is covered with yellowish crusts. The changing area of skin is thickened and can no longer be precisely distinguished from the surrounding area.

The painful inflammation spreads more and more without treatment by a veterinarian. The fur hairs break off and fall out in the area of the hotspot. The rest of the coat is dull and dull. The dog’s skin is covered with small scales. An unpleasant odor is noticeable.

Where Does a Dog Hotspot Come From?

The hotspot is caused by the dog scratching. The causes that trigger the itching are very different. They range from parasites and allergies to skin injuries.

Cause – How Does a Hotspot Develop in Dogs?

Any disease that causes itching can cause a hotspot in the dog.

What Happens In the Skin During a Hotspot?

The hotspot is caused by the dog’s behavior. The four-legged friend scratches itself as a result of the severe itching and injures the skin. The destroyed skin cells secrete an enzyme that causes further itching.

The immune system responds to the injury. Prostaglandins and leukotrins are formed, which increase the inflammation more and more.

Bacteria get into the superficial hotspot through the dog’s claws when it scratches. These multiply and penetrate into the deeper layers of the skin. A deep hot spot, from which purulent secretion is secreted, has developed. If the dog keeps scratching, the inflammation spreads more and more throughout the body. If the scratching is stopped, the hotspot recedes. He’s going down.

Example of clinical images of a hotspot in the dog

Diagnosis and Detection of Hotspot in Dogs

The diagnosis of hotspots in dogs is made by the veterinarian through a clinical examination of the skin. A swab is used to determine which bacteria and fungi have settled in the wound. Staphylococci, streptococci, and pseudomonads in particular can be detected in large numbers in most deep hotspots in dogs. In addition, there is a high number of granulocytes, which are cells that migrate to the inflamed hotspot.

What Investigations Should Be Carried Out to Find Out the Cause?

In order for the hot spot to heal, it is important to eliminate the cause of the itching. If flea excrement, mites, or fungal spores are detected in the dog’s fur, the ectoparasites and skin fungi must be eliminated by treating the dog appropriately. If an allergy is present, the greatly increased eosinophilic granulocytes can be detected in a blood test.

What Can You Do About the Dog’s Hotspot?

As soon as a hotspot is noticed, treatment must be started. The wound is treated with drying and astringent agents. If there is already a deep hotspot, the veterinarian treats the dog with antibiotics and cortisone against the itching. Socks and a neck brace prevent further scratching.

Hotspot in the Dog – Treatment

In order for the hotspot to heal in the dog, the itching must be stopped first and foremost. If the dog stops scratching, the hotspot heals. The stage of a decongesting hotspot develops.

Scratching is prevented by putting on a funnel or neck brace. In addition, the cause must be combated. The dog is given antiparasitic or antifungal drugs (medicines against skin fungi). To reduce itching, cortisone is given in the form of tablets or an injection.

If the hotspot is already purulent, antibiotics are used in the treatment. A previously prepared antibiogram guarantees that the bacteria in the hotspot react sensitively to the antibiotic and die off.

The glued fur over the hotspot is carefully shaved off. Afterward, the dogs’ skin must be cleaned and disinfected with a Betaisodona solution or Octenisept spray. In the case of a superficial hotspot, disinfection with hydrogen peroxide is also possible. Drying astringents prevent further wetting of the hotspot.

Under no circumstances should zinc ointment, powder, or oily substances be applied to the hotspot. These cause an airlock, the skin can no longer breathe under the ointment layer. Especially pus bacteria multiply very quickly under these conditions.

Can a Dog Hotspot be Treated with Home Remedies?

If it is a superficial hotspot in the dog, treatment with home remedies makes sense. These prevent bacteria from penetrating the wound and support dehydration.

Irradiation with an infrared laser or a quartz lamp promotes blood circulation in the skin. Pollutants are removed more quickly. The swellings subside in a short time. If the hot spot is caused by painful arthrosis of the joints, treatment with a pulsating magnetic field can also be carried out. The waves penetrate deep into the tissue and accelerate the formation of new cells.

Prophylaxis – Can Dogs be Protected From the Inflammation?

If the dog is predisposed to develop hotspots, it is not possible to prevent dermatitis from occurring. With these dogs, it is important to closely monitor their behavior. If the dog scratches itself more frequently, the skin should always be examined immediately for a hotspot. The tail, inner thighs, front legs, nose and ears, neck, and back must be examined particularly carefully.

Regular brushing and combing of the fur prevents tangles and ensures good blood circulation in the skin. Loose hairs from the dead undercoat are combed out and cannot collect over the dog’s skin. During brushing, the skin can be examined for changes.

It is important to use the right brush. Sharp edges of the bristles can injure the dog’s skin and trigger a hotspot in the dog.

A high-quality and healthy feed with lots of nutrients supports the function of the immune system. Avoiding grains and sugars in dog food also reduces the risk of allergies.

By regularly applying a spot-on against fleas, ticks, and mites, the dog is protected against infestation with ectoparasites. Fleas and ticks die before the first bite and cannot cause an allergic reaction. Alternatively, preventive treatment with tablets that prevent parasite infestation is also possible.

Treatment already at the beginning of a hotspot 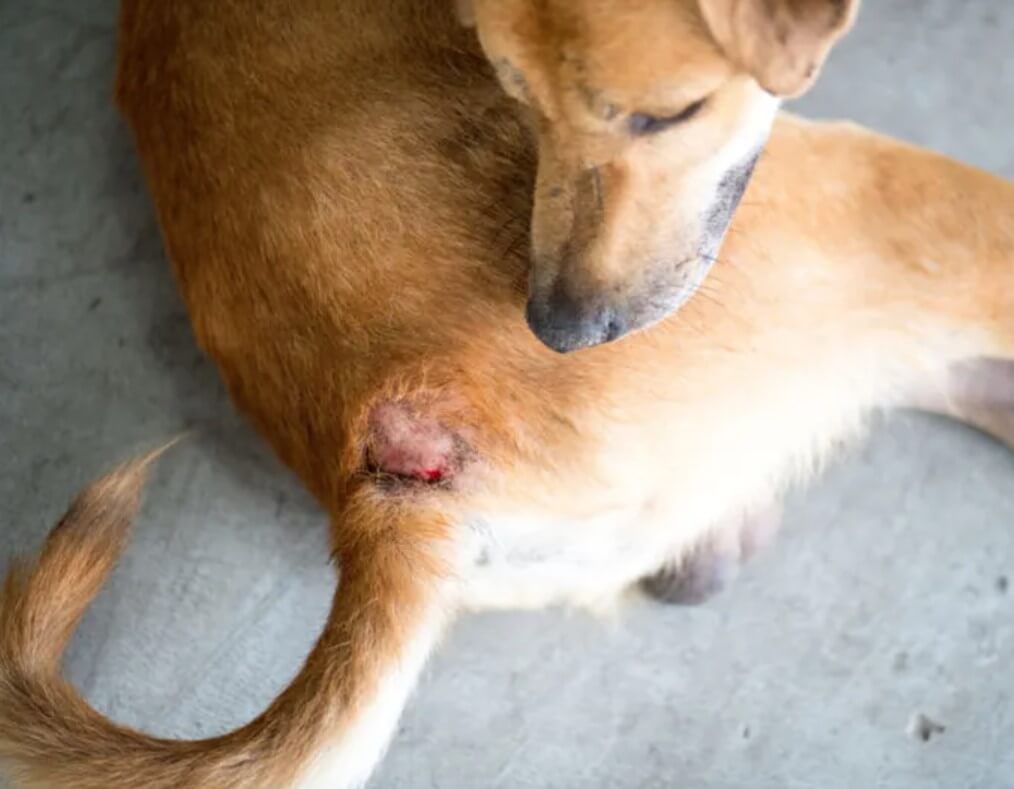 If a superficial hot spot is noticed, the dog should be evaluated and treated by a veterinarian to determine and eliminate the cause of the itching. At the same time, it is possible to start with a supportive treatment of the hotspot with home remedies. The earlier treatment begins, the faster the hotspot heals.