Falcons are perfect hunters: With their special flight technique, they hunt other birds in the air or swoop down on prey on the ground.

Contents show
1 Characteristics
1.1 What do hawks look like?
1.2 Where do hawks live?
1.3 What types of falcons are there?
2 Behave
2.1 How do hawks live?
2.2 Friends and foes of the hawk

Falcons are birds of prey. They have a relatively small head, large eyes, and the hooked beak typical of birds of prey. Its body is slender, its wings are long and pointed, and its tail is relatively short. The toes on their feet are long and strong, allowing them to dexterously grab their prey. The females of the falcons are usually significantly larger than the males. These are also called “Terzel”, which comes from the Latin “tertium”, which means “third”.

For example, the American falcon is one of the smallest falcons. It is only 20 to 28 centimeters tall and weighs just 100 to 200 grams. Its wingspan is 50 to 60 centimeters. The male kestrels have a rust-red back and gray-blue wings that end in black. The belly is light and mottled. The cap on the head is grey-blue. The American falcon has three black stripes on the head. The females have rusty red wings and several black bands on the tail, while the males have only one black band. 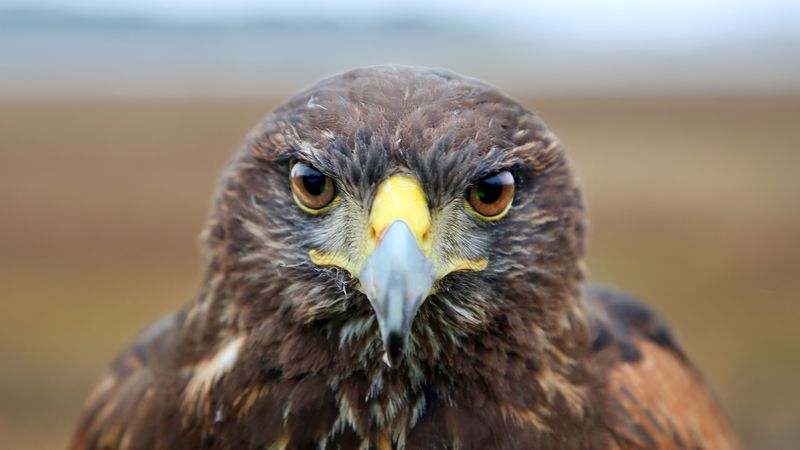 The saker falcon, on the other hand, is one of the largest falcons. It belongs to the hunting falcons and is a compact, powerful bird. Males and females of the saker falcon look almost alike and are therefore almost indistinguishable from one another. The upper side of the body is colored dark brown, the tail is lightly brown on top. The head and abdomen are also lighter in color than the body. The upper side of the body is darker mottled and banded than the lower side body.

The saker falcon is between 46 and 58 centimeters tall and has a wingspan of 104 to 129 centimeters. Its wings are long and pointed, but wider than e.g. B. the peregrine falcon. The male squirrel weighs only 700 to 900 grams, while the females weigh 1000 to 1300 grams. The feet – also called fangs – are yellow in adult animals and blue in young ones. Saker falcons can be confused with juvenile peregrine falcons but have a lighter-colored head.

One of the largest falcons native to us is the peregrine falcon. The male weighs 580-720 grams, the female up to 1090 grams. His back is slate gray. Neck and head are colored black-grey. A dark stripe of beard stands out on the pale throat and white cheek. The wings are extremely long. The tail, on the other hand, is very short.

Where do hawks live?

The different species of falcons are distributed all over the world. American hawks are at home throughout North and South America. However, individual animals are said to have even strayed to Europe. Saker falcons are mainly found from Eastern Europe to northern China and India. They can be found in Turkey all year round. They also migrate to the regions north of the Black Sea to Ukraine to breed. In Central Europe, they can only be found in the Austrian Danube forests. Since the late 1990s, however, a few breeding pairs have also been observed in the Elbe Sandstone Mountains in Saxony.

A real globetrotter, on the other hand, is the peregrine falcon: it can be found on every continent on earth. Falcons inhabit a wide variety of habitats. American hawks can adapt to many different habitats: they can be found in parks as well as fields, in forests, and from the desert to the high mountains.

Saker falcons live mainly in forest and dry steppes and in semi-deserts. They can be found up to 1300 meters above sea level. Saker falcons need large hunting grounds with open terrain. Peregrine falcons also love open terrains such as river valleys and steppes. They also settle on church towers in cities to breed. Importantly, the habitat is home to many birds that serve as prey for the hawk.

What types of falcons are there?

There are around 60 different species of falcon worldwide. Among the most well-known are the peregrine falcon, the kestrel, the tree falcon, the merlin, the lesser falcon, the red-footed falcon, the Lanner falcon, Eleonora’s falcon, and the gyrfalcon. Desert falcons and Barbary falcons in North Africa are particularly skilled hunters. The prairie falcon lives in the Southwest of the USA and in Mexico.

There are six different breeds of the saker falcon itself. There are about 20 subspecies of the kestrels, native to America from Alaska in the north to Tierra del Fuego in the south. These subspecies can be colored very differently.

How do hawks live?

American hawks are very skilled hunters. For example, they like to lurk on roads for prey, where they sit on trees or poles. Saker falcons are particularly aggressive hunters and agile fliers. They usually overwhelm their prey with a lightning-fast surprise attack.

Because they are such skilful hunters, tamed saker falcons are still often trained in Asia today for so-called hawking or falconry. You can even bag animals up to the size of a rabbit. The saker falcon is usually called “Saker” by falconers.

The ancient hunting technique of falconry was first practiced by the nomadic peoples in the steppes of Asia and was widespread in China and Japan as early as 400 BC. She was particularly valued at the court of Genghis Khan. Falconry came to Europe with the Huns. In our country it used to be reserved for the nobility.

Falconry is also called hunting. The word “Beiz” comes from “to bite”. Because the hawks kill their prey with a bite in the neck. It takes a lot of patience to train a falcon to hunt, because birds of prey, including the saker falcon, are very difficult to tame. Since the bird initially sits on the hunter’s hand when hunting, the first thing it has to do is get used to staying calmly on the hand.

To do this, it has to be carried around for a few hours every day. In addition, the falcons have to lose their fear of the dogs that accompany the hunt. The natural behavior of the birds is exploited during the falconry hunt: falcons can see very well into the distance and spot prey from afar.

So that the bird does not become restless, it wears what is known as a falcon’s hood when hunting as long as it sits on the falconer’s hand. The hood is only removed when it is supposed to strike the prey. The first thing the hawk sees is the prey. It flies off the falconer’s hand and kills the prey. The birds are trained to then hold onto their prey and stay with it until hunters and dogs approach. 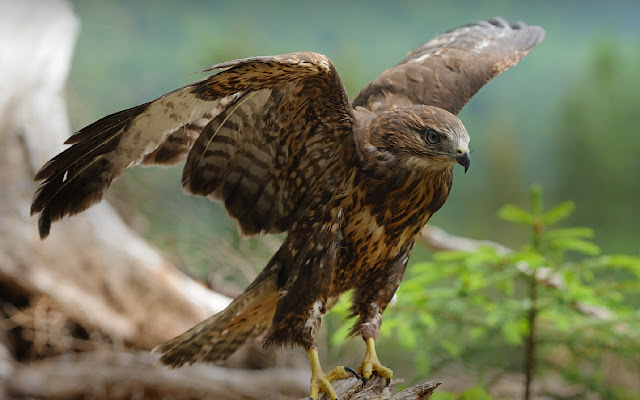 In order to be able to find the falcon better, it wears bells on its feet. If the falcon misses its prey, it returns to the falconer. With this hunting technique, humans and birds benefit from each other: humans can hunt animals that would otherwise be difficult to kill, and the falcon gets food from humans.

Females are mostly used for hawking because they are slightly larger and stronger than the males. With saker falcons and other falcons, pheasants, partridges, pigeons, gulls, ducks, geese, herons, magpies and crows are mainly hunted.

Being a falconer is a real job, and if you want to hunt with falcons, you have to do special training: you not only need a hunting license, but also a falconry hunting license. By the way: today hunting falcons are used e.g. B. also used at airports to drive away birds that can be dangerous to the starting aircraft if they get into their engines.

Friends and foes of the hawk

Because they are very skilled fliers and very strong, hawks have few enemies. At most, the eggs or young animals can fall victim to nest robbers such as ravens – but they are usually well guarded by the parents. Sometimes it happens that, although it is strictly forbidden, people steal young hawks from the nests to train them to hunt.