Gundis look like a cross between South American guinea pigs and chinchillas. But the small rodents come from North Africa.

Gundis belong to the rodents and there to the squirrel relatives. They measure about 17.5 centimeters from head to bottom and have a tiny tail that is just one and a half centimeters long and has long bristles. The Gundis’ head has a blunt snout with long whiskers. Their dense, very soft fur is striking: it is reminiscent of the fur of the South American chinchilla. The fur consists only of soft hairs. Bristly guard hairs, which protect the soft fur from moisture in other animals, are missing. Their hair is colored beige, brown, or gray on the top of the body.

Because the Gundis’ neck and shoulders are quite broad, their body shape appears somewhat stocky. The undersides of their front and hind legs are soft with large, pillow-like pads. The Gundis’ hind legs are slightly longer than their front legs. Although Gundis are rodents, their chewing muscles are not particularly strong and they are not very good at gnawing. Eyes and ears, on the other hand, are well developed so that they can see and hear well. 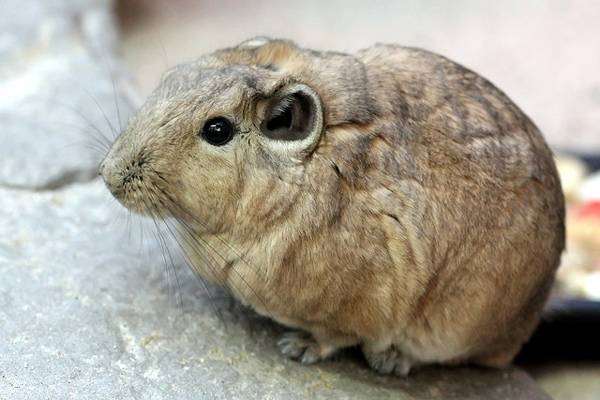 Gundis is native to northwestern North Africa, Morocco, and Tunisia. There they live mainly in the Atlas Mountains. Gundis dwell in crevices in the mountains and on the fringes of great desert steppes.

What types of Gundi are there?

The Gundi belongs to the comb finger family. There are four different genera, each with only one species. In addition to the Gundi, there is the long-haired Gundi, which lives in the middle Sahara, the Senegalgundi in Senegal, and the bush-tailed Gundi in Ethiopia and Somalia.

How old do Gundis get?

Because they are so little research, it is not known how old Gundis can get.

Because the Gundis’ fur is so soft and fluffy, they have a problem when they get wet: when they get wet, their hair sticks together in tufts. Gundis then comb their fur with the claws of their hind legs. They have short, horn-like tips and are covered with long, stiff bristles.

That’s why Gundis are also called comb fingers. To comb them, they sit on their hind legs and then work their fur with their claws. With their claws and bristle combs, Gundis are also very good at digging in the desert sand. Although Gundis look rather chubby, they can move quickly: they scurry swiftly over the rocks.

When observing their surroundings, they sit on their hind legs and support their front body on their outstretched front legs. Gundis are very good climbers thanks to their claws and crests on their feet, and they scale steep cliffs effortlessly by hugging their bodies close to the rocky ground. To sunbathe, they lie flat on their stomachs.

Gundis are early risers: they wake up from around 5 a.m. and come out of their underground burrow or cave.

Then they first sit still and motionless in or in front of the cave entrance and observe their surroundings. If the coast is clear and there is no enemy in sight, they start to eat. As the morning heats up, they retreat to their cooler caves and crevices to rest. Only in the late afternoon – around 5 p.m. – do they become active again.

The Arabs, therefore, call this time “the hour when the gundi goes out”. At night the Gundis sleep in their safe rock caves. Gundis can often be seen walking around alone in their habitat. But they probably live together in family groups in their burrows. Unlike other rodents, however, they do not have fixed territories. When Gundis from different family groups meet, they do not disperse or fight with each other.

Friends and enemies of the Gundis

Gundis have a lot of enemies: these include birds of prey, snakes, desert monitor lizards, jackals, foxes, and genets. If a Gundi encounters such an enemy, it falls into what is known as a state of shock: it remains rigid and completely immobile. The same happens when you touch a Gundi. Even if you then let go of the animal, it will remain rigid on its side for a few seconds or even minutes. A Gundi can look as if it were dead: it can stop breathing for a few minutes, its mouth is open and its eyes are wide open. This is how the Gundi tries to avoid the attention of its enemies. Eventually, it begins to breathe again, sits still for a short time, and finally flees.

Not much is known about how Gundis breed. The young should be precocial, be born with open eyes and hairy, and be able to walk right away. They are about seven to eight centimeters tall and spend the first time in their protective cave.

Gundis emit a peculiar peeping and chirping whistle that is sometimes reminiscent of a bird. The whistle is a warning sound. The more alarmed the Gundis are, the louder the whistle.