With their black and white plumage, guillemots are reminiscent of little penguins. However, the seabirds only live in the northern hemisphere and they can fly, unlike penguins.

Guillemots belong to the auk family and there to the guillemot genus. The birds are on average 42 centimeters tall, the wingspan is 61 to 73 centimeters. The black feet stick out over the tail in flight. An adult animal weighs about a kilogram. Head, neck, and back are brown-black in summer, belly is white. In winter, parts of the head on the chin and behind the eyes are also colored white.

The beak is narrow and pointed. The eyes are black and sometimes surrounded by a white eye-ring, from which a very narrow white line runs to the center of the head. However, not all guillemots have the eye ring and the white line. Birds with this pattern are mainly found in the north of the distribution area, they are then also called ringlets or spectacled guillemots.

Where do guillemots live?

Guillemots live in the temperate and subarctic regions of the northern hemisphere. They can be found in northern Europe, Asia, and North America, i.e. in the North Atlantic, the North Pacific, and the Arctic Ocean. There is also a small population in part of the Baltic Sea belonging to Finland.

In Germany, i.e. in Central Europe, there are only guillemots on the island of Heligoland. There they breed on the so-called Lummenfelsen. Guillemots live in the open sea. They are only found on land during the breeding season. Then they look for steep cliffs to breed.

What types of guillemots are there? 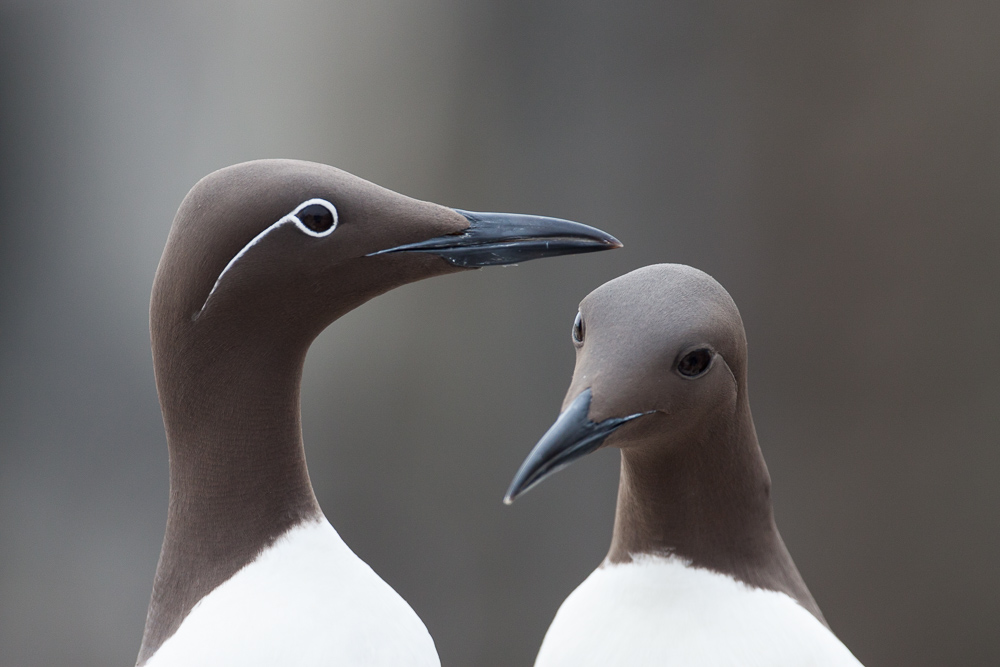 How old do guillemots get?

Guillemots can live for over 30 years.

How do guillemots live?

Guillemots are seabirds that spend most of their lives in the open sea. They only come ashore to breed. They are active during the day and at dusk. On land, guillemots appear rather clumsy, walking upright on their feet with a waddling gait. On the other hand, they are very skilled divers and can also fly well. When they swim, they paddle with their feet and move relatively slowly. When diving, they move with flapping and rotating movements of their wings. They usually only dive a few meters deep, but in extreme cases, they can dive up to 180 meters deep and for three minutes.

When hunting for fish, they initially only stick their heads in the water up to their eyes and look out for prey. Only when they have spotted a fish do they submerge. When guillemots change their plumage, that is, during the molt, there is a time when they cannot fly. During these six to seven weeks they stay at sea exclusively by swimming and diving.

During the breeding season on land, guillemots form colonies. One of the largest is on the east coast of Canada, made up of around 400,000 guillemots. In these colonies, the individual pairs, which usually stay together for one season, live very close together. On average, up to 20 pairs breed in one square meter, but sometimes more.

After the breeding season, some animals stay close to their breeding grounds at sea, while others travel far and wide. Not only do guillemots get along well with one another, they also allow other seabird species to breed in their colony.

Friends and foes of the guillemots 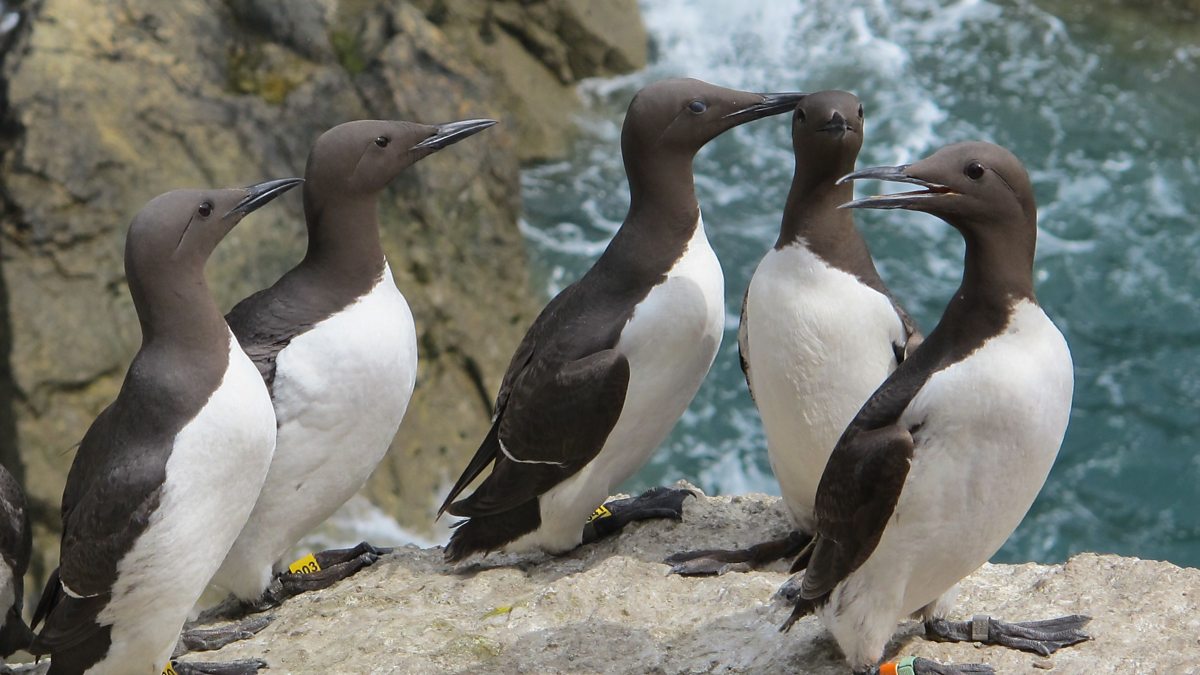 Guillemot eggs are often eaten by corvids, gulls, or foxes. Young birds can also fall victim to them. Primarily in the past, guillemots were hunted by humans and their eggs were collected. Today it only occurs occasionally in Norway, the Faroe Islands, and Great Britain.

How do guillemots reproduce?

Depending on the region, guillemots breed between March or May and June. Each female lays only one egg. It is placed on the bare, narrow rock ledges of the breeding rock and alternately incubated by the parents on the feet for 30 to 35 days.

An egg weighs about 108 grams and each is colored and marked slightly differently. Therefore, the parents can distinguish their eggs from those of other pairs. So that the egg does not fall off the cliff edges, it is strongly conical. This makes it just spin in circles and doesn’t crash. In addition, the eggshell is very rough and adheres well to the substrate.

A few days before the young hatch, the parents begin to call so that the little ones know their voice. When they finally crawl out of the egg, they can already see. The boys initially wear a thick down dress. After hatching, the young are cared for up to 70 days before they can fly properly and become independent.

At about three weeks, the young have to pass a tremendous test of courage: although they cannot yet fly, they spread their short wings and jump from the high breeding rocks into the sea. A parent bird often accompanies them. When jumping, they call brightly and loudly to keep in touch with their parents.

This so-called Lummensprung usually takes place in the evening during twilight. Some young birds die in the jump, but most survive even if they fall onto the stony beach: Because they are still chubby, have a layer of fat and a thick coat of down, they are well protected. After such a “misleading” they run in the direction of the water to their parents. Guillemots stay in shallow sea regions for the first two years of life. They return to their nesting rock at around three years of age and become capable of breeding at four to five years of age.

How do guillemots communicate?

It gets loud in the breeding colonies of guillemots. A call that sounds like “wah wah wah” and can almost turn into a roar is typical. The birds also make howling and grunting noises.