A green iguana is a very popular pet among terrarium keepers. However, due to its size, it requires a lot of time and sufficient space. Find out everything you need to know about the correct keeping and care of the popular exotic species here. 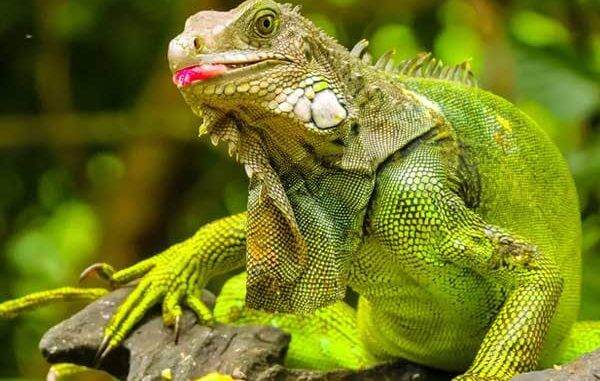 Green iguanas are real “giants” among pets. Her head alone can have an average circumference of around 45cm, in some cases, it is even larger. In total length, the iguana can reach up to 2.20 m, including the tail. And of course, an animal of this size also weighs a decent amount. The popular exotic species can weigh a proud 10-11 kilos. Whereby it is with the lizards – as with most animal species – that the males are often somewhat larger and more massive. If a green iguana is kept as a pet, it will live to be between 10 and 17 years old, but there have also been animals that have reached the age of 25 years. Age in particular, however, depends very much on a healthy and balanced diet. Although the name of the animals suggests a green color, their patterns are often greyish-green and often have a strong influence of brown. Male green iguanas sometimes even have a red-orange color. In the wild, the lizards can be found in Central America and northern South America. However, individual cases even report green iguanas in the extreme south of the United States – especially in Miami. Green iguanas prefer to live in flat areas under 1000m and near bodies of water. The iguanas are particularly active during the day and prefer to stay in trees, but they also like to spend their time in the water. Once the green iguana has looked for a place to live, it is very rare that it will leave it again.

Leaves instead of insects

When you see the green iguana, the first thing you think is that this animal certainly feeds on insects or smaller mammals like mice. But that’s not true. Green iguanas are herbivores, so they prefer to eat leaves, plants, or even fruits and vegetables. You should definitely pay attention to this when keeping them at home. As a daily meal, it is best to offer your animals a colorful mix of different plant-based foods and leaves. The mixture should be very rich in nutrients and vitamins so that your exotic can lead a happy and vital life. However, you should make sure that too many fruits and vegetables are bad for the green iguana, as too much of them can have a negative effect on digestion. They should be fed fresh feed two to three times a day. The best place for meals is not on the ground, as with other animals, but rather at the same height as branches, since green iguanas like to climb. In addition to the main food, it is also advantageous to offer the animal a source of minerals, for example in the form of a sepia bowl, and possibly also to feed it with vitamin supplements from time to time. Of course, freshwater should always be available.

Lots of space to run and climb

Due to the size of the green iguana, its habitat should be correspondingly large. The lizards love to climb and mostly spend their time in the wild between the branches of a tree. Therefore, you should be aware that the animal needs various elevations and branches to climb and hide in its own home. In order to offer enough hiding places, cork plates and tubes are also suitable. Since iguanas are good swimmers, a small pool of water can be set up in which they can refresh themselves. The pool should be heated, as the animals are used to tropical warmth and normal water would be too cold for them. It almost goes without saying that the entire enclosure should be naturally planted and heated so that the green iguana feels comfortable. A temperature between 25 and 28 ° C and a total temperature between 35 and 37 ° C is best. At night, however, it should be cooled down to around 20 to 25 ° C. With a sprinkler system or a fogger you can also ensure the perfect climate because the humidity for a green iguana is best between 80 and 95%. You also have to pay attention to a lot of light, because lizards need a high light intensity. In addition, UV-A and UV-B radiation are advantageous.

Green iguana – it needs a lot of attention 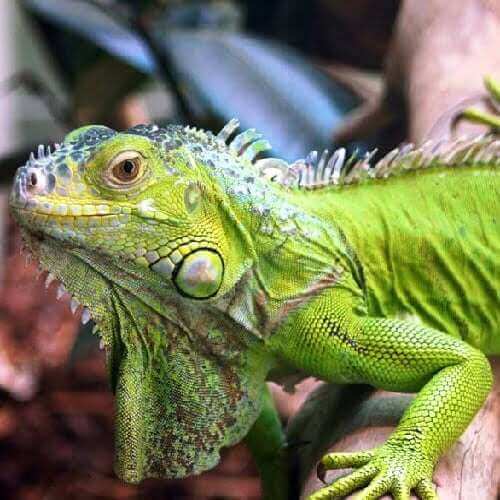 Before buying a green iguana, you should definitely be aware that these exotic species require a lot of care. The enclosure must offer plenty of space for climbing and hide, as a green iguana lives in the canopy of trees in the wild. You should also make sure that the temperature and humidity are right. When feeding, particular care should be taken to ensure that only vegetarian food is provided. However, too many fruits and vegetables are not good as they can result in very poor digestion. Therefore, meals should mainly consist of leaves and grasses. If you are aware of all of this, the green iguana can be a great exotic pet that you can enjoy for a long time!