The German Jagdterrier is one of the hardiest, straightforward, and hunting-loving dog breeds in this country. His courage and tenacity in work make him an outstanding hunting dog. For the owner, his determination and independence can be a challenge. Properly brought up and from the very beginning accustomed to the desired breed, a strong dwarf becomes an excellent companion. 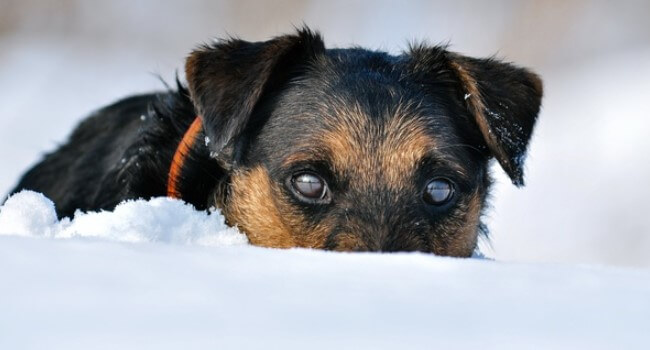 In the first third of the 20th century, worldwide interest in dogs as companion and family dogs, as well as in show breeding, increased. Many breeds that were previously used as hunting and working dogs have now been bred for friendliness and suitability for everyday use rather than toughness, drive, and endurance. Many terrier breeds were also affected.

Therefore, a handful of terrier lovers and hunters set themselves the task of breeding a German Jagd Terrier whose characteristics and physique were to guarantee its suitability for hunting. The original breeds included the Fox Terrier and the English Terrier. Later Fur Terriers, Welsh Terriers, and Old English Terriers were crossed.

Since the Second World War, the Jagdterrier has established itself firmly in hunting circles and is still used there as a hunting dog. Many breeders give their pups to hunters just because the brave, smart dogs need to hunt like other dogs need to play.

Given the purpose for which the German Jagdterrier was bred, it quickly becomes clear why its character is so extraordinary: a small hunting dog has incredible self-confidence, endurance, enthusiasm for work, and perseverance. He also needs it when he has to follow tracks in the forest alone and, under certain circumstances, even confront a wild boar. He is brave and persistent, but thanks to his intelligence in an emergency, he also knows the limits of his abilities when faced with dangerous games.

A strong terrier is mobile and active – he does not get tired of a long day in the forest. On the contrary: he requires a lot of exercise and is not satisfied with one long walk a day with other dogs.

The German Jagdterrier is loyal and attentive to its people. He is friendly and tolerant, especially when it comes to children in the family. However, the prerequisite is that he gets enough work and workload. The stubborn terrier needs clear rules both at home and at work. He is not afraid to ask them questions, although with the right upbringing he is very sociable and easy to manage. If there is no leadership, he willingly takes on this role, which will sooner or later lead to significant problems with posture. These include, for example, intense guarding and barking, uncontrolled hunting or surveillance of family members.

The German Jagdterrier is not an affectionate, playful family dog. It has been bred for decades for performance and willingness to work. It carries an endless amount of energy and needs people who are ready to understand and use these qualities. Therefore, the red and black hunting dog is best kept in the hands of hunters to this day. There he receives training and uses appropriate to the breed.

Consistency and ingenuity are of paramount importance in education. The German Jagdterrier is ready to work with his man if he understands his ideas and commands. He learns to “sit” and “down” not for the sake of command, but as part of his hunting training. He is considered precocious and often begins to replace the game with seriousness even before his first birthday. Doggy tricks, finding treats, and the like are the icing on the cake, but they don’t replace working in the woods. 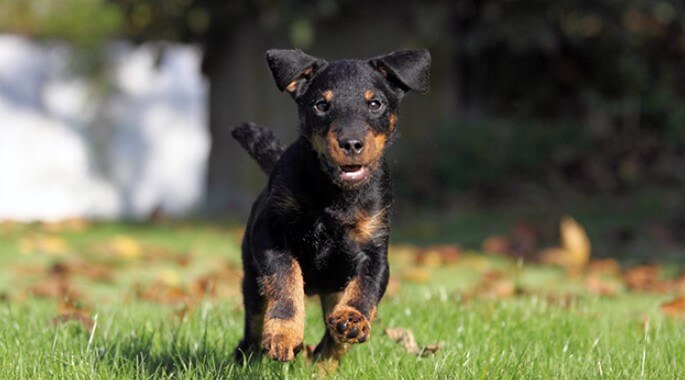 Work on impulsive control and frustration tolerance is essential to training a Jagdterrier. Both are crucial for controlling a dog with a strong hunting instinct in later exciting encounters with the game and preventing self-hunting.

Socialization in the first few months at home is also important. Dogs must learn to read other dogs and behave socially through dog encounters. Like many other terriers, the German Jagd Terrier tends to mistake foreign dogs for troublemakers from a certain age. Here it is useful to practice in advance that ignoring is better than mobbing.

The German Jagd Terrier, with its plain, thick, coarse coat or rough, smooth coat, is extremely easy to care for. Periodic brushing is enough to keep its coat clean.

More important is the control of the eyes, ears, teeth, and claws. This should be done after every work assignment because tough terriers often do not show injuries.

The exceptionally strong hunting instinct of the German Jagd Terrier makes life with small animals and cats a challenge. Many hunters report that their well-trained terrier can get along well with cats and other small animals in the same household. However, you should never leave them alone in a room together. Also, the key to success is often the correct maintenance and early acquaintance with the puppy.

Robust terriers have a life expectancy of 15 years or more. It is important not to overfeed them and give them enough exercise.