Working on the hand is ideal for both experienced and young horses. Young horses get to know some of the aids without rider weight and this work is a welcome change for older horses. Handicraft is suitable for training, correction, and gymnastics of practically all horses.

The young horse can learn to take the first steps by hand using the halter. As soon as the work is to be a little finer, a cavesson is helpful. Well-trained horses can also be worked on the bit. 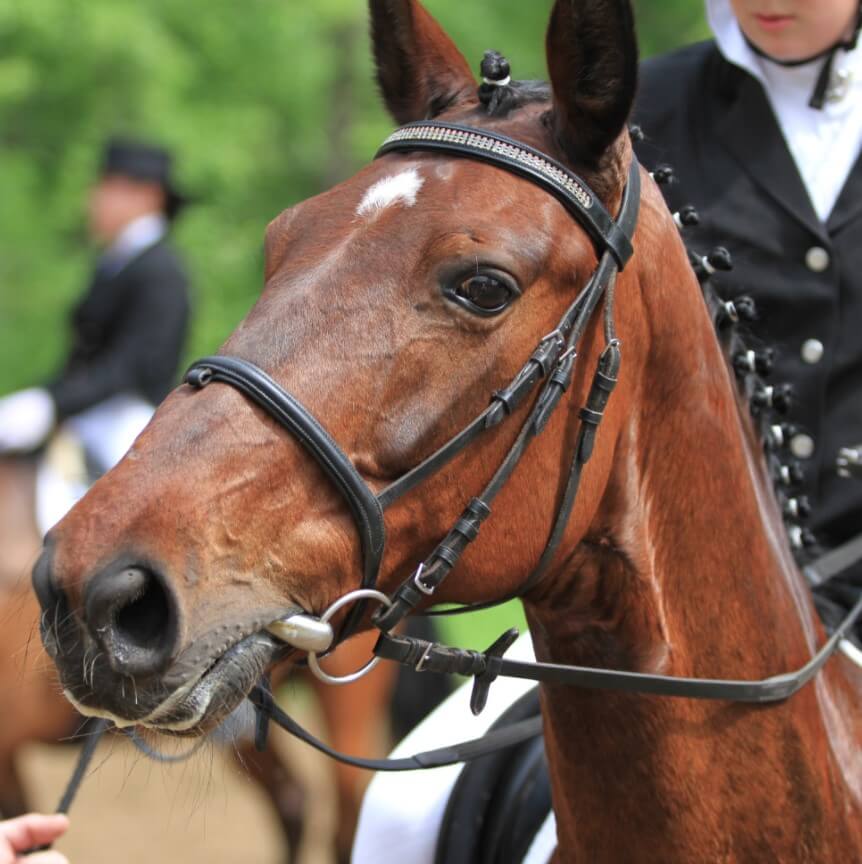 I think a cavesson works well for most horses. One can argue about the type of cavesson: Many riders swear by traditional cavessons with nasal irons, while others prefer flexible Biothane cavessons.

I will now introduce you to a few frequently used cavesson models.

The Spanish cavesson, the Serretas, have a steel bow that is partially covered with leather. Some models have small spikes on the inside. I clearly advise against such Serretas. Even a simple variant of the Serreta is comparatively sharp and therefore belongs in experienced hands.

The French Caveson has a flexible chain (comparable to a bicycle chain), which is covered by a leather tube, as a nose part. One advantage is the very good adaptability of the flexible chain to the horse’s nose. But a Caveson is also quite hot and only belongs in experienced hands.

The German cavesson has a piece of metal that is subdivided several times and is padded quite thickly as a nose part. Care must be taken that the joints in the nosepiece do not cause a “pinching effect”.

The Pluvinel consists of a narrow leather strap without a nose iron. The modern Biothane cavessons are often made in a similar manner.

Whichever cavesson you choose, it should fit your horse well! The cavesson is properly seated when the nose piece should be about two fingers wide below the zygomatic bone. The gaiter strap is buckled tightly, unlike the throat strap of the bridle, because it prevents the cavesson from slipping. The noseband is also buckled relatively tight so that the cavesson does not slip. But of course, the horse still has to be able to chew! Based on experience, I can say that a rather buffalo horse that cannot be led delicately on a soft cavesson will not be more cooperative with nose irons. Here the solution is often more to be seen in basic education and preparatory groundwork.

When you work your horse by the hand, you have three aids available: whip, voice, and rein aid. The whip and the voice act both driving and braking (whip also sideways) and the reins braking or setting. In this way, young horses get to know the most important aids. Leadership exercises are suitable for practicing. Here the horse learns to take care of you. To lead you to give a clear command, the whip can swing backward (pointing is usually enough) to send the horse more forward if necessary. A whip is also helpful when holding: it supports the voice command and your own body language and is then held across the horse. So the device forms an optical barrier. The rein aid is rarely used when stopping and starting, a slight parade on the outer rein can at best draw the horse’s attention – braking and stopping are done with the voice, if possible.

Side movements will help you to exercise your horse. To make it easier for your horse to learn them under the saddle, you can practice them very well on the hand.

Trespassing is well suited for the first sideways-pointing steps. When stepping on, the outer side of the horse is stretched. By pointing sideways with the crop, the horse gets to know the help that points sideways. A limiting hand on the noseband helps prevent the horse from stepping forward. The horse then virtually walks a circle around you.

Shoulder-in itself is both a releasing and a gathering exercise. Here the horse moves on three hoof beats: the fore-hand is placed so far inwards that the inner hind footsteps into the track of the outer forefoot. It is important that the hindquarters remain active. Here, too, the outer rein limits the horse and prevents it from being too strong. I find it helpful, as is customary in academic riding, to go backward in front of the horse. Then I can position the forehand better and possibly prevent a swerve over the outer shoulder with a whip pointing outward to the shoulder. I also have a better view of the hindquarters.

In the traverse, the horse is placed and bent in the direction of movement. The forelegs remain on the hoofbeat, the hindquarters are placed at about 30 degrees in the inside of the track, and the hind legs cross. The first steps in the traverse are easiest to develop when the horse has learned to bring the croup inwards on the whip that is passed over the back. This is best practiced on the gang: When you stand inside the horse, you take the whip over the horse’s back and tick the hindquarters. Praise your horse if it now dodges its hindquarters with a step inwards! Of course, it takes a lot of practice until these first steps become a correct traverse with position and bending!