The ferret is now becoming more and more popular as a pet: The button eyes and cute face are just two reasons why many people come across this little predator. Here you can find out what is important when keeping and caring for animals.

First, there are a few points to clarify before you should bring a ferret into your home. First of all, you have to clarify with your landlord whether he allows you to keep such an animal. After all, ferrets don’t live exclusively in cages and are ultimately still predators. It is ideal if the whole family stands behind the idea and would help care for the animal.

You also have to consider that the acquisition and maintenance costs are higher than with other small animals. The animals can live up to ten years and are therefore a long-term commitment. The cage required is quite large for an animal in the apartment, and they should also be able to enjoy the free run. Here it can happen that the curious animals nibble on all the things that need to be replaced. They mainly eat meat, which is also more expensive to buy than food for other small animals.

Finally, the veterinary costs are often higher: healthy ferrets should be vaccinated at least once a year so that effective protection against viral diseases can be guaranteed. Caring for them, on the other hand, is less laborious – they keep themselves pretty clean: it is sufficient to brush the fur now and then, to trim the claws, and to clean the ears. Bathing is only necessary if the vet recommends it or if the stinker is very dirty; use a special shampoo.

If by now you still think the ferret is a good pet, now let’s move on to information about this little predator.

The ferret (lat. “Mustela Putorius Furo”) is the domesticated form of the wild, free-living European forest tilt (lat. “Mustela Putorius”): The wild animal was thus tamed and in the past was often used to hunt rats. In the meantime, through further breeding and crossing, different color variants have emerged, the best known are probably the polecat or albino ferrets. The most important difference between ferrets and wild polecats, which also has a significant impact on keeping, is that the wild animal is a loner and lives alone in its territory; Ferrets, on the other hand, are sociable pack animals, so do not keep them alone.

Males are generally larger than females and can reach a body length of up to 45cm and a weight of 800g to 2kg. The females are only about 35cm tall and weigh between 550g and 900g. An important visual feature is a bushy tail, which is about half the length of the body.

All animals are very lively, extremely curious, and playful. Therefore it is not appropriate to keep such a social animal alone. With a little patience, you can even raise them to a certain extent, but they always have nonsense on their mind. They can also be house-trained, but small mishaps still often happen.

As already mentioned, ferrets need company, ideally, you will keep two or three animals together. The socialization is by the way easier in the puppy age than later, then it can not work with a peaceful coexistence even with “can not smell each other”. Incidentally, if you get used to it slowly and carefully, this can also work with dogs or cats. Other small animals should not be tried as the ferret will tend to view them as prey.

If you want to keep the ferret indoors, the first thing you need is a cage. This should have a floor space of at least 2 m² and extend over several levels so that the space is ideally used and there is enough space for toys and activities. You should make sure that the wire in the enclosure is not too big: otherwise, the animal could try to squeeze through. You also have to make sure that there are no sharp edges or points. Incidentally, it is easiest if the floor is water-repellent – PVC coverings or tiles are ideal.

An important part of the interior design is a dormitory that acts as a cave substitute. It should offer enough space to cuddle up, taking the basic dimensions of 40 x 30 x 30 cm. A hole in the front, which should be between 7 and 11 cm in size, serves as an entry point. To make it cozy inside, you can use old T-shirts or scraps of fabric. Straw, hay, or litter should not be used, as they often become a source of bacteria and vermin.

A litter box serves as a toilet and should be placed as close as possible to the sleeping quarters and the feeding area. Finding a suitable cage in stores is sometimes not that easy, but it is relatively easy to convert an old cupboard or something similar into a “do it yourself” cage, which you can design according to your own taste. Ferrets can also be kept outside, but care must be taken to ensure that they are adequately isolated.

Free Running in the Apartment

This is also an important point, as there is not enough space in the cage to let off steam. Every day around 5 hours of exercise is ideal. There should be a litter box here or there so that the ferret doesn’t forget to be house brown out of the sheer joy of playing. By the way, cat toys are ideal for occupation and distraction from the rest of the home furnishings. It is important to take precautionary measures right from the start and eliminate all potential sources of danger (e.g. open cables, candles, cleaning agents, etc.). Of course, you should also deal with the animal yourself during this time or even go out with it: There are special harnesses and leashes that most animals get used to quickly. 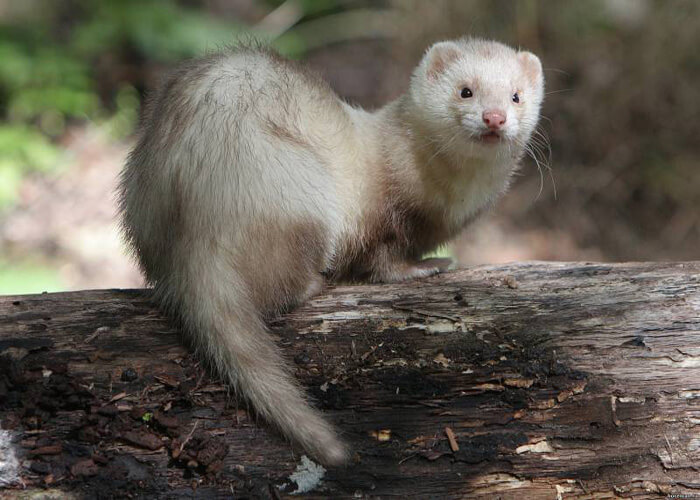 Ferrets have a short colon and therefore a fairly short digestion time: these three to four hours do not give the digestive system much time to absorb all of the nutrients. It is therefore important that the feed is ideally designed: 20% should consist of vegetables and 80% of animal protein. They also lack the appendix, which is why the enzymes necessary to break down grain are not available.

You can feed the animals with special ferret food from the trade (dry and wet food). In addition, it is advisable to feed fresh (frozen) meat – after all, the little ones are real predators. Live food can be but does not have to be. Most animals also like to accept treats such as fruit.