Dogs and wolves are closely related, both have the scientific name “Canis lupus”, but there is also a “familiar” in the case of dogs. That’s right, a study from America now shows.

Dogs are man’s best friends, even puppies can interpret gestures and appearance correctly. And by doing so, they even beat our closest relatives: “Chimpanzees can outrun a dog in many ways,” says Brian Hare of Duke University in Durham, North Carolina. “But they don’t understand communicative gestures very well.”

The researchers attribute this to the fact that it has to do with the domestication of dogs, which began about 15,000 years ago.

Brian Hare and his colleagues wanted to take a closer look at this hypothesis: can dogs naturally understand human gestures and shouldn’t learn to do so – or is it true that dogs’ communication abilities come from an ancestor they share with wolves? Because previous research has shown conflicting results about whether puppies of dogs and wolves can instinctively read human gestures.

To this end, Hannah Salomons’ team examined about 80 dog and wolf puppies between the ages of five and 18 weeks. The puppies — Labrador Retrievers, Golden Retrievers, or a mix of both — were the service dogs for training. They lived with their siblings and mother for up to eight weeks. And all this time he practically did not contact people. Young wolves grew up with people around the clock from the tenth or eleventh day. They were hand-fed and allowed to sleep in their guardian’s bed. 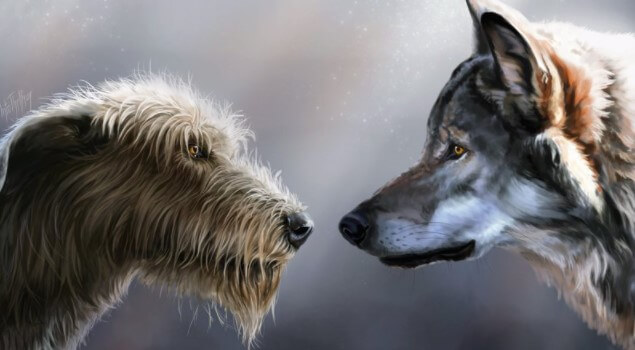 In the first attempts, an unknown or familiar person approached the puppies. Result: If it was an unknown person, the dogs were more than 30 times more likely to be touched than wolves. If the person was familiar, the skepticism of the wolves died away. Nevertheless, the puppies were also more sociable here: young dogs touched people five times more often than wolf cubs.

In the second experiment, food was hidden in one of two boxes. If the person pointed to the feeder, young dogs understood the signal 78% of the time. However, in the case of wolves, it was just an accidental hit.

In another experiment, food was also hidden, but this time there was no signal from humans. Each test lasted 30 seconds. Result: During this time, the puppies looked people in the eye for an average of four seconds to see if the signal was coming. For wolves, it was just under 1.5 seconds. The researchers concluded: “Puppies of dogs, but not wolves, are attracted to people and early show the ability to understand human gestures, although baby wolves were more socialized with people.” There is “an unusual interest in humans that early development of social skills in dogs,” writes Hannah Salomons’ team.