Little Philou: He flatters himself with the look of the proverbial Dachshund, behind his floppy ears he is a sly fox. The Dachshund is no longer the exclusive hunting companion but has established itself as a popular pedigreed dog. He is one of the classics among domestic dog breeds. However, its distribution is currently declining.

Dachshund is a typical German breed of dog, bred for hunting in the Middle Ages: with its short legs and elongated body, it could penetrate any lair, hence the outdated name “Dachshund”. The ear canal remained protected by hanging ears. Outside of Germany, the Dachshund became popular when Queen Victoria became interested in the breed in the 19th century. There are long-haired Dachshunds, short-haired Dachshunds, and wire-haired dachshunds. The size of the Dachshund is usually determined not by the height at the withers, but by the girth of the chest. According to the FCI standard, the length of the Dachshund must be at least 35 cm. For the miniature Dachshund, a range of 30 to 35 cm can be achieved, and the chest circumference for the rabbit Dachshund cannot exceed 30 cm.

Despite their handy size, Dachshunds are not lap dogs. The bundles of energy are too alive and busy for that. As a Dachshund owner, you should have time for long walks and planning. Care must be taken when dachshunds live with other pets: they prey on other people’s small animals and those outside the home. The nature of the Dachshund is characterized by a great deal of courage and fearlessness. This is understandable because when used for hunting, the dog could always meet defending animals. This trait continues: Dachshunds have no problem attacking larger dachshunds and barking to defend their position. Dachshunds are friendly to people and reserved towards strangers. Attachment to people in Dachshunds is less pronounced than in other breeds. Because Dachshunds are suspicious and alert, they make excellent guard dogs. 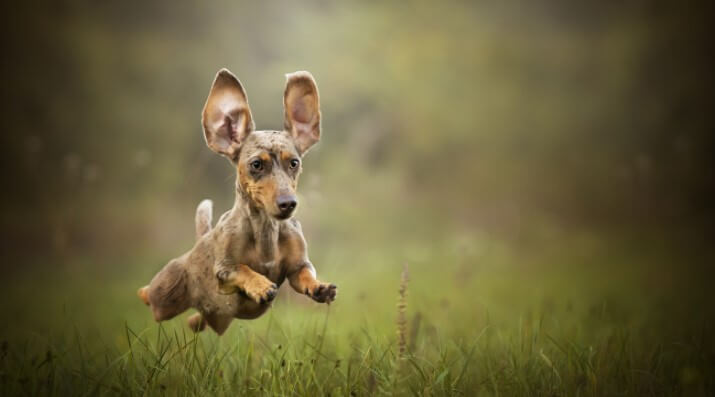 Dachshunds are self-confident, have their own opinions, and tend to overestimate themselves. Be consistent in raising your housemate before the dwarf takes over the house! With consistent reward-oriented training, Dachshunds can be persuaded to cooperate. Tasks are also important: tracking is a good activity, corresponding to the natural behavior of the Dachshund. Digging is also one of the favorite activities of the Dachshund. In general, he prefers long, exciting dog sports. The tow rope and harness are indispensable accessories for the owner of the Dachshund. Passionate scavengers quickly disappear into nearby bushes in a hunting fever and are difficult to distract from their trail. Dachshunds do not worry that they will lose sight of their owner. If you are in areas rich in-game, remember that when in doubt, the rabbit is more important to the Dachshund than obedience. Thus, the Dachshund is not a suitable breed for beginner dog breeders, but a hardworking animal with a hunting instinct.

Anyone roaming the undergrowth close to the ground should be checked regularly for ticks, especially in summer. To care for them, use tick tweezers, a fur comb, and a brush that matches the texture of the fur. The skeleton and joints of the Dachshund are not designed for high sports performance or heavy loads. So counteract obesity and keep your dog from climbing stairs as much as possible.