The Cymric cat is originally from the Isle of Man, UK. It is closely related to the Manx cat but has a longer coat. Their most noticeable feature is the lack of a tail. In Germany, the Cymric cat is therefore classified as a torture breed.

Contents show
1 The Appearance of the Cymric: A Cat Without a Tail
2 Cymric Cat Tail Shapes
3 Temperament: Cheerful and Playful
4 Cymric Cats Like Water
5 Keeping and Caring for the Cymric Cat
6 Grooming: Brush Regularly
7 Health and Breeding: Tailless Problems
8 Cymric Cats are Considered a Torture Breed
9 Buying a Cymric Cat?
10 History: The Cymric Comes From the Isle of Man
11 Breeds of Cats Without a Tail
12 Conclusion

The Appearance of the Cymric: A Cat Without a Tail 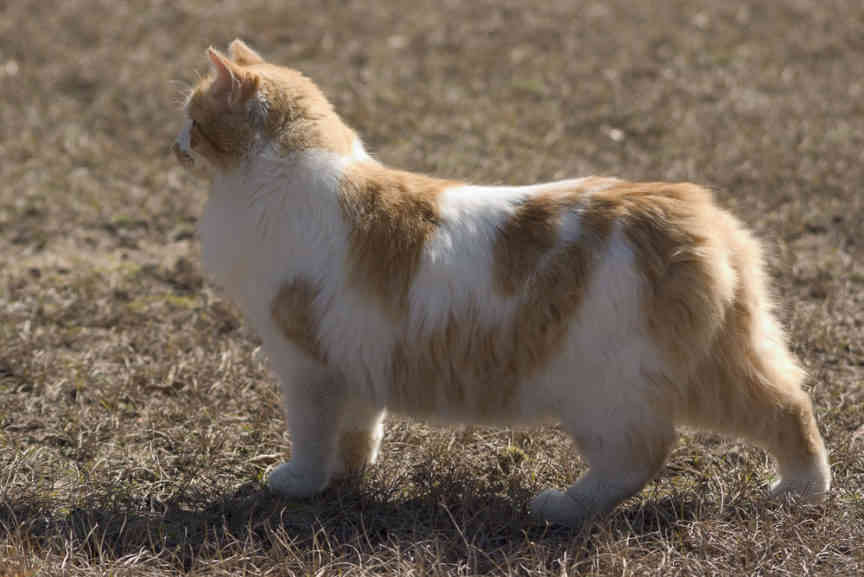 The Cymric has a fluffy coat, a round head, and a compact build. Her eyes are large and round, and the ears are set wide apart.

With a weight that moves between three and six kilograms, the Cymric is one of the medium-sized cat breeds.

Their coat is half-length, thick, and has plenty of undercoats. All coat colors, drawings, and eye colors are recognized by the breeding associations.

Because its back legs are longer than the front legs, the Cymric cat resembles a hopping rabbit when it walks. This impression is reinforced by the missing tail.

Most Cymric cats have no tail at all. Some individuals only have a small stump tail. This anomaly is typical of Isle of Man cats. The relatives of the Cymric cats, the Manx cats, are almost all tailless.

These different tail shapes are found in Cymric cats:

Cymric cats are good mouse hunters. The cat breed is considered fun-loving, active, and curious. A Cymric is interested in everything that goes on in the family and wants to be there everywhere. If you have a Cymric in the house, you don’t need a watchdog. The attentive chick reacts immediately if something is wrong from her point of view and starts to growl.

The Cymric also has a calm, gentle side. She enjoys taking a nap on her human’s lap. In general, this breed is very people-oriented, loyal, and affectionate. The Cymric should also get along well with conspecifics and even with dogs.

As former desert animals, cats are usually afraid of water. Few cat breeds, such as the Turkish Van, like water. The Cymric cats are also said to have an unusual fondness for the cool water.

Keeping and Caring for the Cymric Cat

Cymric cats need a lot of attention. If you want to give her a home, you should have plenty of time to play and cuddle.

Members of this breed of cats are considered to be very intelligent and love to be taught tricks. Clicker training or cat agility are ideal employment opportunities. With the right training, the smart velvet paws should also be enthusiastic about a walk on a leash.

The Cymric’s thick coat should be brushed three to four times a week. Regular grooming will keep your kitty’s coat from becoming matted.

You should also regularly check the hairy ears for contamination and clean them if necessary. Dirt can get stuck in the hair, and mites can also nestle in the auricles.

The Cymric cat’s missing or stunted tail is due to a genetic mutation. However, it is not only the tail that is affected. The genetic defect affects the entire spine and spinal cord.

For example, you can find animals with deformed or fused vertebrae. Some also suffer from an open back (spina bifida). Symptoms of paralysis in the hind legs and problems with the disposal of feces and urine are common consequences. Veterinarians have also found that tailless cats are extremely sensitive to pain in the pelvic area.

If you mate two tailless Cymric cats, 25 percent of the kitties die in the womb or die shortly after birth.

Cats need their tails to keep their balance while climbing. It is also an important means of communication. If it is missing, the animals are severely restricted in their natural behavior.

Cats of this breed are also said to be prone to arthritis, a painful inflammation of the joints.

In Germany, the Cymric cat and its relative, the Manx cat, are considered a torture breed. Experts understand torture breeding as the toleration or promotion of breeding traits that are associated with pain, suffering, or behavioral disorders.

According to Section 11b of the Animal Welfare Act, torture breeding of vertebrates is prohibited in Germany, but the breeding of tailless cats is also highly controversial in other countries.

In Germany, cats of this breed are very rarely offered. On average, a Cymric cat costs between $500 and $800.

The relatively high price is primarily due to the difficult breeding. Because of the genetic damage, many offspring do not survive – and so the litters of Cymric cats are smaller than those of other cat breeds.

Please: Even if you have fallen in love with beautiful animals, you should not buy a Cymric cat from a breeder. Because with your demand you are promoting the targeted “production” of cats with serious health problems.

You might find what you are looking for at your local animal shelter instead. It is not so rare that pedigree cats end up in animal welfare.

History: The Cymric Comes From the Isle of Man

The Cymric cat is closely related to the Manx cat. Both cat breeds originally come from the Isle of Man, an island located in the Irish Sea between Ireland and Great Britain.

The cats that lived there developed a gene mutation that was responsible for the missing tail. Due to the island’s location, the genetic defect was able to prevail. A larger population of tailless cats developed.

Because the cats lived on the Isle of Man, they were called “Manx cats”. In the 1920s they were recognized as an independent breed by the breed associations.

The name Cymric cat comes from the word “Cymru”, the Welsh name for Wales. However, the cat breed has nothing to do with the part of the United Kingdom of Wales – they just wanted to give it a Celtic-sounding name.

Breeds of Cats Without a Tail

The Manx and Cymric aren’t the only breeds of cats without a tail. The Japanese Bobtail, the Mekong Bobtail, the Kuril Bobtail, the Pixiebob, and the American Bobtail are also tailless. 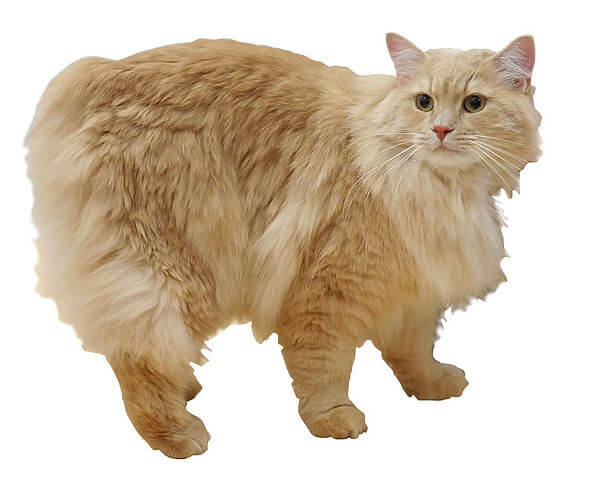 The Cymric cat impresses with its pretty appearance and its lovable personality. She is intelligent, playful, and people-oriented.

However, breeding them is extremely problematic and should not be supported for ethical reasons. Better to give a home to a Cymric cat from the shelter, or to look for a different breed of cat right away.