The small Coton de Tuléar (in English “Cotton from Toliara”) from Madagascar belongs to the Bichons. The small dogs with white cotton fur are delicate and soft to the touch because they have no undercoat. They have only been increasingly bred in Europe and the USA for the past 20 years. There are many things to consider when choosing a breeder.

Contents show
1 The Appearance of the Cotton Dog
1.1 Size and proportions
1.2 It is to these breed characteristics that breeders of cotton dogs pay attention
1.3 The white cotton dress of the Coton de Tuléar
1.4 Small “blemishes” inbreeding
1.5 Differences between similar dog breeds
2 History of the Coton de Tulear
2.1 A late breakthrough
3 A Lap Dog with a Surprising Amount of Strength

The Appearance of the Cotton Dog

The cotton hound, like many bichon dogs, is white or white with a slight tinge. The cotton-like fur is particularly soft and slightly wavy – like a cotton flower. Since the undercoat is completely missing, the lapdogs with dark noses are happy about dog jackets on long walks in winter. So that the hair on the head does not cover the eyes, many owners use a braid or regularly take their four-legged friend to the dog groomer. Muscles, facial features, and body shape are barely recognizable under the fluffy cotton fur. Males reach a height at the withers of between 26 and 28 cm, bitches are even smaller and measure a maximum of 25 cm at the withers. Thus, the Coton de Tuléar is a real Teacup Dog. Nevertheless, bitches can weigh up to 5 kilograms and males up to 6 kilograms. The withers are in the ratio of 2:3 to the total length of the body.

The white cotton dress of the Coton de Tuléar

The basic color of the fur must always be white, only slight markings with a few fawn-colored or black hairs are permissible for breeding. On the ears, the greyish or fawn-colored stitching may be a little denser. The fur is never rough or hard, but it grows very dense.

Inbreeding, small deviations from the breed standard are significant, but purely visual features are not a problem for private owners. You can usually get puppies with breeding errors a little cheaper than animals suitable for breeding. With the Coton de Tuléar, many medically irrelevant breeding errors are noted in the FCI:

History of the Coton de Tulear 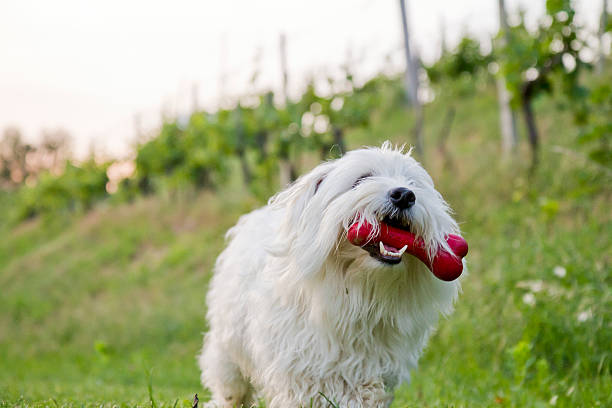 Rumors are circulating on the internet that direct ancestors of the cotton dogs came to the island from Madagascar in the Middle Ages by pirates and shipwrecks in the area. In fact, similar dogs were kept as companion dogs on medieval ships to offer as “freebies” to merchants and nobles. More Bichons came to the island with French sailors and stewards in 1883 when France declared it a colony.

Up until two decades ago, a purebred cotton dog was still a rarity in Europe and the USA. There are now numerous breeders and two German clubs that deal with breeding the breed. Due to the large population boom in the last 20 years, breeders have to pay special attention to a pedigree with a large gene pool and often even search internationally for suitable breeding animals.

A Lap Dog with a Surprising Amount of Strength

The small cotton tufts are always cheerful, never suspicious or aggressive, and very well tolerated. They adapt quickly and get along well with new members of the pack after a few days. Cats, small animals, and strangers quickly take the dogs to their hearts. The Coton’s peaceful and happy nature is one of the most important characteristics of the breed.