Degus are cute and voracious rodents that are originally native to Chile. The distinct social behavior of the animals is particularly interesting – they live together in large colonies. You can find out more in the text.

The degu or Octodon degus, as it is called in Latin, belongs to the rodents as a mammal and originally comes from Chile. More precisely, it comes from the plateaus there, at an altitude of over 1,200 meters. Nothing is safe from his teeth: he eats grass, bark, herbs, and seeds of all kinds with a great appetite. A degu rarely comes alone, because these rodents are very communicative and live in colonies of at least two to five females, various males, and their offspring.

If you want to find out more about the cute rodents, then read on in our guide. Here you can find out how the degus “talk” and where these animals sleep. Make yourself smart!

Contents show
1 The Common Degu or the Degu
2 Degus: Appearance and Body Care
3 The Sensory Organs of Degus
4 Degus and Their Diet
5 Degus: Mating and Reproduction
6 The Way of Life of the Degus
7 Species Protection for Degus?

The Common Degu or the Degu 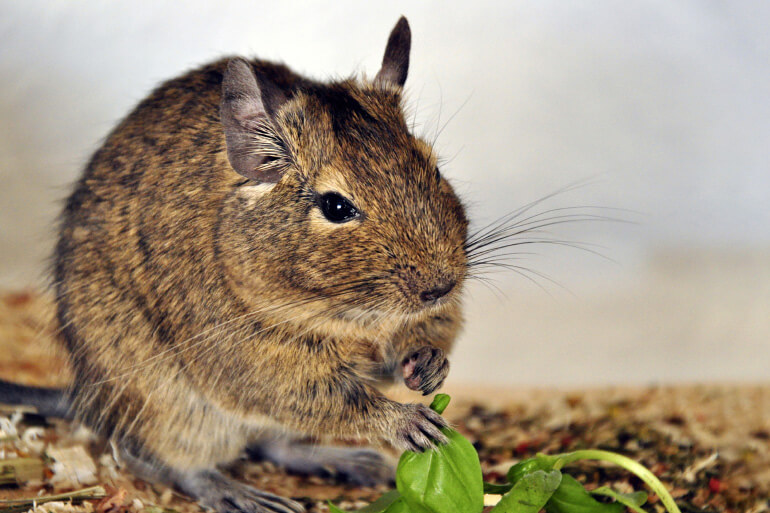 Octodon Degus – the syllable Octo means “eight” and probably refers to the shape of your molars.

The degu’s physique is quite compact. The males are usually somewhat larger and more voluminous than the female representatives of this species. The silky fur of the degus usually has a warm nougat tone. The stomach and legs are comparatively light. Degus love to clean each other and regularly take a dip in sand baths to groom their fur.

Typical characteristics of the cute rodents are:

If a degu is grabbed by the tail, for example, it will tear off in most cases. This surprising effect gives the nimble rodent in the wild a head start in seconds to start the flight. The wound at the base of the tail hardly bleeds and heals without any problems. The tail no longer grows back, which hardly affects the quality of life of the affected degus. For your information: You should still never hold a degu by the tail!

The Sensory Organs of Degus

Like animals that are active during the day, degus can see very well. In addition, their eyes are very far out and therefore almost a 360 ° field of view is available to them. Degus can perceive everything all around without moving their head. In the wild, degus therefore usually become aware of enemies in good time and thus reach old age.

The degu’s nose is rounded and rather flat. The small rodents use them to track down their food and use them to sense dangers and predators such as foxes, birds of prey, and snakes. The degu also marks its territory. He uses his nose to control fragrances.

Degus’ ears are big and when it’s quiet, they fold them up discreetly. If there is any noise, they put their ears back up immediately.

Degus have so-called vibrissae. These are whiskers with an unusually large number of nerve cells. They sit on the small snout, on the cheeks, and around the eyes and serve as a guide for the degus.

Degus and Their Diet 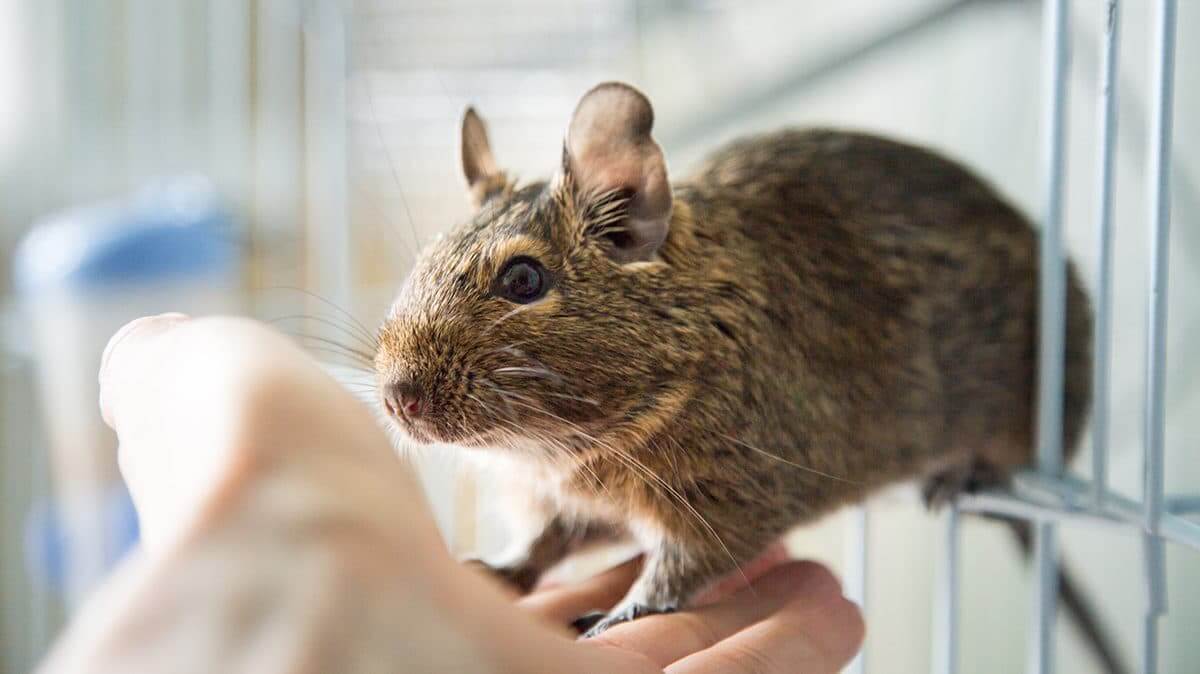 The digestive system of degus is designed for a diet rich in fiber. They digest through the large intestine – more precisely in the appendix – with the help of the fermentation that takes place there. It is the biochemical conversion of food by enzymes. Degus take the excreted feces again in order to digest it a second time. In the wild, they prefer to feed on the following:

Degus share. Your kind has a large repertoire of tones, growls, and whistling noises. They are able to gargle and warble. Animal watchers confirm that a degu who feels harassed will grind his teeth. In this way, the animals can communicate with one another in a very specific way – for example when looking for food.

In principle, degus can have offspring up to four times a year. In the wild, however, they reproduce at most half as often. Degus are fully grown at around 55 weeks of age, but the animals are able to reproduce at an average of six months. In nature, the mating season begins in May to June, but can also take place in autumn until the end of October.

During the mating season, degu males are often very aggressive and mark the structure of their favorite with urine. After a gestation period of around 85 to 95 days, the females give birth to their young. You pad a nest with hay beforehand. The offspring are suckled for six weeks by the mother, but also by other females belonging to the group.

After birth, the little ones are fully developed because they are born with their eyes and fur open. You leave the nest on the second day to explore the area. They are only suckled for about two weeks, after which they start to eat solid food. Degus are very communicative from an early age and maintain social relationships with other adult animals in their group as well as with their littermates.

The Way of Life of the Degus

The life expectancy of degus is quite high at seven years in view of their barren habitat and their dangerous predators. That may be due to their defensive abilities and their group behavior. The following behaviors secure their existence:

Degus dig a complex underground tunnel system with their powerful claws. It can be up to half a meter deep underground. All members of a group share the building because degus are social animals. They love the community and even help each other raise the young. They also store their food in underground passages and caves. This is how degus secure their nutrition in winter and protect them from predators. Incidentally, degus do not hibernate, they only provide themselves with plenty of food for the colder winter months. 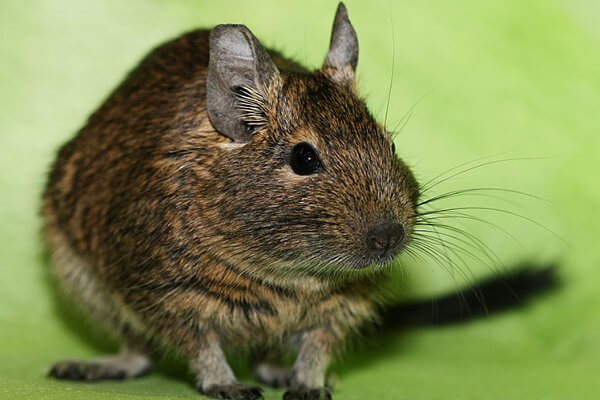 Regardless of which living being it is about: “Your life is responsible for what you have made familiar to yourself”. This saying by Antoine de Saint-Exupéry expresses a guiding principle that stands for animal welfare and that you too should take seriously. Degus are not threatened with extinction and are therefore not under species protection, but these rodents are nevertheless created for the habitat of semi-deserts, plateaus, and forests. No cage can teach them what they can live out in the wild and in their native areas of activity in South America.

Also, make sure that degus are not cuddly toys that people like to hold in their hands. They are by no means suitable for individual keeping. Degus need company because in nature they live in large family groups. It is very difficult to keep degus in a species-appropriate manner. That is why animal rights activists advise against degus as pets.