The name “cockatoo” comes from the Malay word “Krakatau” – which means “pincers”. So the name refers to the cockatoo’s powerful, large beak.

Cockatoos belong to the family of parrots. Unlike South American parrots, however, they are not brightly colored. To do this, they wear a feather bonnet on top of their head, which they can raise according to their mood. Often this tuft of feathers glows a different color than the bird’s body. The second characteristic of the cockatoo is its powerful beak: you can not only open and close it, but also move it sideways. That’s why they can crack even the hardest nuts and seeds with ease.

As with all parrots, the first and fourth toes of their feet point backward, the second and third forward: they use the foot like a pincer, allowing them to dexterously grasp objects and bring them to the beak.

Cockatoos come in many sizes: macaws grow to 80 centimeters, pink cockatoos about 37 centimeters. One of the most common and well-known cockatoos is the Sulphur-crested Cockatoo (Cacatua galerita). It grows to about 50 centimeters tall, is white in color, and has a bright yellow crest on its head. The inner surfaces of the wings and tail are also yellow; its beak is grey-black.

Where do cockatoos live? 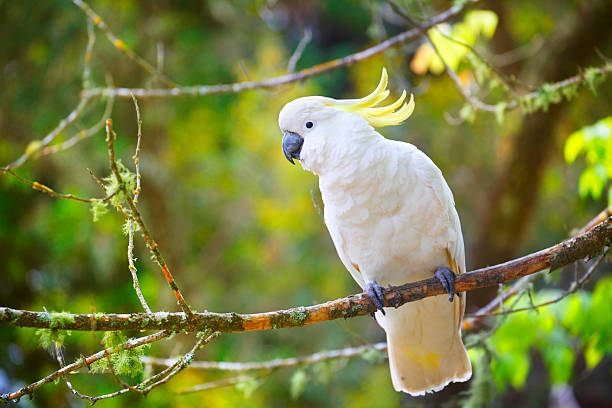 Wild cockatoos are found from Indonesia through New Guinea to Australia, the Philippines, and New Zealand. Sulfur-crested cockatoos are native to Australia, Indonesia, and Papua New Guinea. Cockatoos live in tropical rainforests, but also in savannas and on the coast. When they’re not flying around in large swarms, they’re adept at gymnastics and climbing in tree branches.

What types of cockatoo are there?

How old do cockatoos get?

Cockatoos can live to be extremely old in captivity: some live 80 to 100 years, some even more than 100 years.

How do cockatoos live?

Cockatoos are very good at orienting themselves. Flying many kilometers from their roosts high in the jungle trees early in the morning in search of food, they easily find their way back to their nests in the dense jungle. While they search for food on the ground, some animals play sentinel: With loud calls, they warn the others when danger is imminent. Cockatoos are unmissable; with their deafening screeches they give themselves away from afar.

Because cockatoos are such smart animals and also love company, they are also very demanding in captivity:

If you can’t keep them in pairs, you have to play with them and play with them for many hours a day. When kept alone, a cockatoo definitely needs someone to be home and take care of most of the time. But anyone hoping to teach a cockatoo to talk will usually be disappointed: unlike other parrot species, they aren’t particularly gifted at imitating words or whole sentences.

But they are very tame and cuddly: they let themselves be petted and cuddled with humans. You can even teach them little tricks! If you don’t take good care of them, they become unhappy: they screech loudly and even get really angry. Such a cockatoo’s beak is not only a skillful tool but also a real weapon.

How do cockatoos breed?

Cockatoos can breed all year round, so they don’t have a specific breeding season. They usually lay two to four eggs in a tree hollow. Males and females incubate for 21 to 30 days until the young hatch. Small cockatoos are real nest stools: only when they are 60 to 70 days old do they learn to fly and become independent.

How do cockatoos communicate?

Typical of cockatoos is their deafening screeching: In nature, this is not a problem – in an apartment it is. When a cockatoo feels lonely, it can become a real screamer, screeching its frustration out loud to the world. When a cockatoo is a content, it rarely cries.

What Do Cockatoos Eat?

Cockatoos mainly eat seeds, herbs, berries, and fruits; now and then also small caterpillars. In captivity, they love varied food made from nuts and seeds as well as fresh fruit and vegetables: These include, for example, apples, pineapples, bananas, oranges, grapes, kohlrabi, carrots, or peppers. Under no circumstances should you give a cockatoo too much food, otherwise it will become fat and sick. 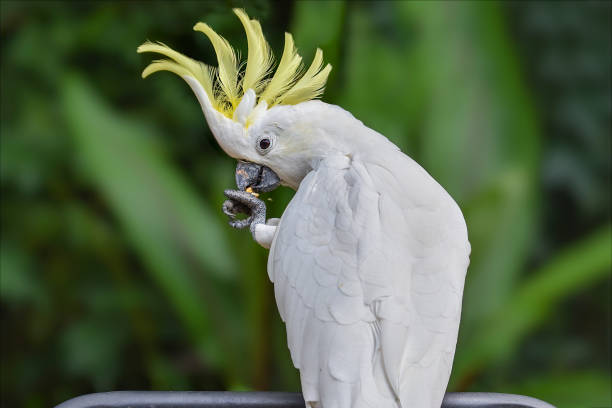 Cockatoos need space: a large aviary is best, measuring 3 meters long, 1 meter wide, and 2 meters high for a Sulphur-crested Cockatoo. A cage is much too small – even if the cockatoo can fly around freely all day long, it only serves as a place to eat and sleep.

Even if cockatoos live in an aviary, they must be allowed to fly around the room freely every day. But you have to be careful with them: everything is a toy for cockatoos, and they use their beak to smash everything that gets in their way.

Cockatoos should always be bought from offspring. This is the only way to prevent endangered species from being caught – and that many animals die on the long journey from their home to us. Every cockatoo from a breed, therefore, wears a ring with a number. The animal must be registered with the nature conservation authority.

The feeding bowl is cleaned daily with hot water and filled with fresh food. So that the animals do not get sick, you have to remove the droppings every day and clean the cage, perches, and toys thoroughly every week.