Hardly any other fish has such a good reputation as an algae eater as a blue catfish. Long-lasting, easy to breed, and eye-catching, that makes it a good aquarium fish. It doesn’t matter that it doesn’t even occur in nature. 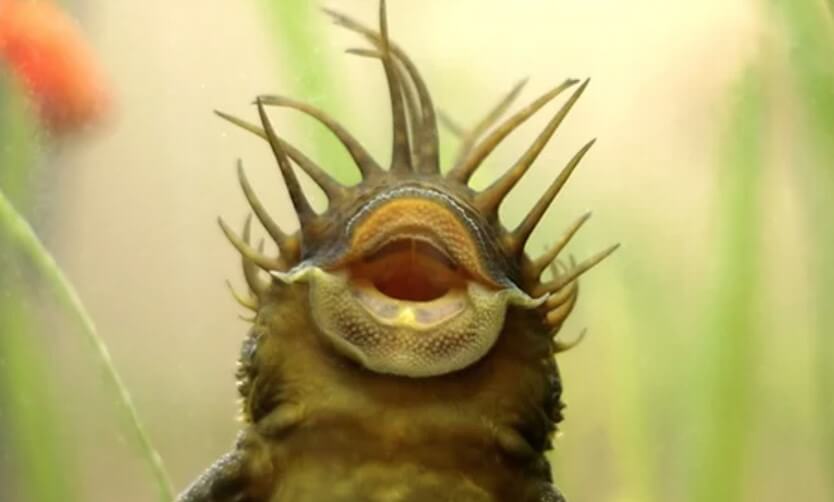 Interesting Facts About the Blue Catfish

A blue catfish usually only grows to around 12 cm, but older specimens in large aquariums can also reach the 15 cm mark.

The body is colored brown throughout with many small to medium-sized, regularly arranged, beige-colored dots. When light falls from the side (especially sunlight), there is a bluish shimmer above the body, which led to its German name. There are now numerous cultivated forms such as gold (light body, dark eyes), albinos (light body, red eyes), and tortoiseshell (some lighter areas on the body).

For a long time, it was assumed that the blue catfish also occur in nature. In more recent studies, however, it was found that it is a crossbreed that has been kept and bred in the aquarium for so long that the exact parent animals, which came from South America, can no longer be determined.

The difference in the sexes is very noticeable. Because in the males, small tentacles develop from a length of about five centimeters, which also branch out in older males. The females usually completely lack these tentacles, but in older females, they can be indicated as short tentacles on the edge of the head (not on the head). The males are also a little more contrasting in color. Females mature to spawn are clearly plump in the abdominal area than the males.

Blue catfish are cave breeders and form a father family. The male looks for a suitable potential spawning site, such as a halved coconut, a stone cave, or a cave formed by roots. There it lures the female and spawns with it. Then the female has driven away. The relatively large, yellow eggs are guarded by the male. The young catfish hatch after about 10-12 days and have used up their yolk sac after a further three days. The father takes care of the boys for a few more days. If spawning does not work spontaneously, the fish can be stimulated by changing the water to a few degrees cooler.

Young blue catfish like to eat algae, while the older ones switch to the food that is normally served and especially like to peel off vegetable food tablets. To aid digestion, they grate the surface of wood and eat it. For this reason, wood (preferably Moorkien wood) should be available in an aquarium for antenna catfish. The hatched young can also immediately take in dry food for herbivores, but like the adults, they are also happy to accept crushed peas or pieces of cucumber.

The males of the blue catfish form territories. Therefore, there should always be more hiding places than males. Especially when adult males are put together, violent territorial fights can occur, which can even lead to deaths. That is why you either use a few young catfish or a larger pair.

The most important thing in an aquarium for blue catfish is a non-sharp-edged substrate and some wood (the softer bogwood is good, which has to be watered well and weighed down in the aquarium because it floats up in the first few weeks and only gradually soaks up). Plants should not be missing either. If enough food is served, even delicate-leaved plants are spared, otherwise, the leaves can be flaked off superficially.

Although there can be violent arguments between the males, the blue catfish are very peaceful with all other fish and ideally suited for a community aquarium. Only other armored catfish that also inhabit caves should not be kept with them, while other bottom-dwelling fish such as armored catfish pose no problem.

The temperature should be between 22 and 26 ° C and the pH value between 6.0 and 8.0, although temperatures between 20 and 30 ° C are well tolerated even over long periods of time.