Some of these funny birds from Southeast Asia are real language artists: Beos imitate many noises and can even repeat whole sentences.

Bees belong to the starling family, are 26 to 35 cm in size, have greenish-black plumage, and bear a yellow band of fleshy lobes on the head and neck. Claws and beaks are yellow to orange-red. Males and females can hardly be distinguished from their external characteristics.

Some researchers write that the dark circles of male and female Beos are colored differently, others believe that the color of the skin flaps on the head is different in intensity – but nobody knows for sure. Ultimately, only the veterinarian can determine whether a Beo is a male or a female with a complicated exam.

Where do Beos live?

Beos are at home in Southeast Asia. They occur between western India, Sri Lanka, and Indonesia to southern China. Beos inhabit the tropical forests of their native Southeast Asia.

What types of Beo are there? 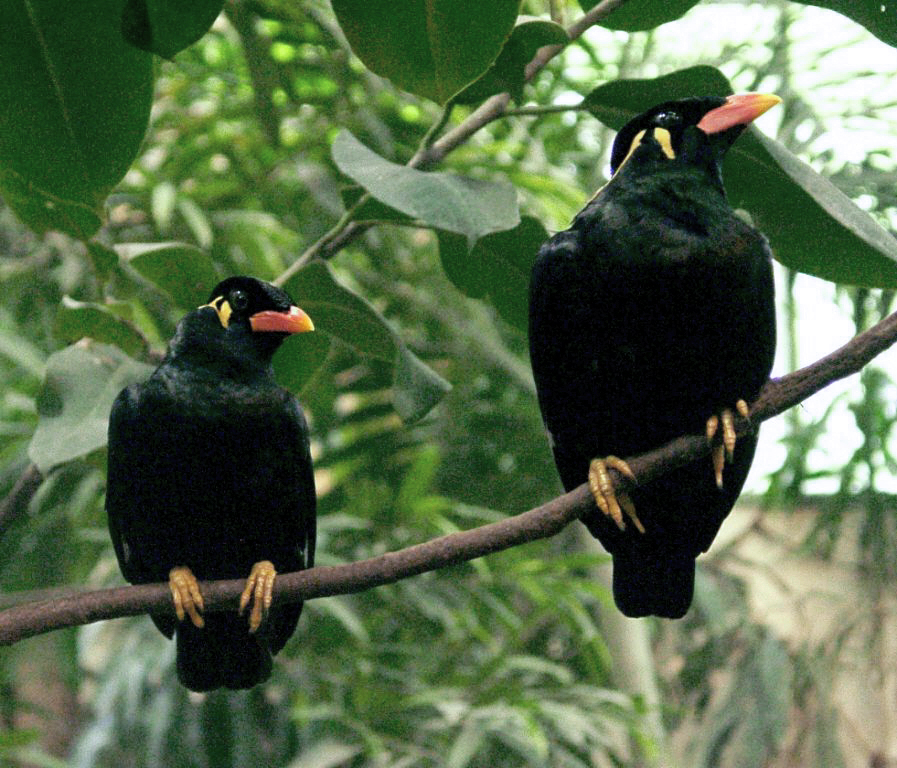 The third, the Great Beo (Gracula religiosa religiosa), is up to 35 cm tall and is found mainly on the Indonesian islands of Bali, Borneo, Sumatra, Java, and Sulawesi. Another eight subspecies of the Beo live in their Southeast Asian homeland.

How old do Beos get?

How do Beos live?

Beos may not look as colorful as parrots, but they are very lively and intelligent birds.

Some of them are even true language artists: they can imitate many sounds and even speak complete sentences. However, you never know when you buy a Beo whether it is one of these talented specimens because there are also some who have never spoken a word their entire life. Beos are very sociable birds and should never be left alone for long periods of time. It is best to keep a couple or a small group.

In nature, Beos roam the forests in small swarms, during the breeding season they only live with their partner. However, it is not easy to keep several Beos in captivity because they sometimes do not get along with each other. Some animals are so used to humans that they no longer accept other Beos as partners or playmates.

Beos need a lot of exercise, so they shouldn’t be sitting in the cage all the time but should be allowed to fly around freely. The apartment is not suitable for this. Since beos eat a lot of soft food, they sometimes put down small heaps every three to five minutes; it doesn’t matter where they’re jumping or flying. In addition, Beos is super curious and nothing is safe from their beak when flying freely.

However, this not only means that they can break things, but also that they put themselves in danger if, for example, they chew on electrical cables or examine the socket. Like all birds, they cannot see window panes and often fly into them, injuring themselves in the process. So you always have to be careful with Beos when flying freely. If you observe them for a long time, you can tell how the animals feel by their behavior: A scared beo, for example, spreads its tail feathers, slims its body, holds it horizontally forward, and then usually makes warning noises.

When a beo is curious and attentive, it keeps its body erect and alternately tilts its head to the side in order to be able to better observe what intrigues it. He turns his head up to 180 degrees. Beos, who want to draw attention to themselves, make hissing noises and stretch their bodies forward. If you keep your body tense when making this sound, then it is a threat and means: “Don’t come too close to me!”

They are ready to attack an opponent when they spread their wings, fan out their tail feathers and inflate themselves with air. Before that, they rattle their beaks to warn the competitor. Beos feel really comfortable when they sit relaxed on a perch, clean their feathers or bathe in the sand.

How do Beos reproduce?

Beos rarely reproduce in captivity. This may be because we mostly have Beos raised by people who have never learned how to live with a Beo partner and raise young. 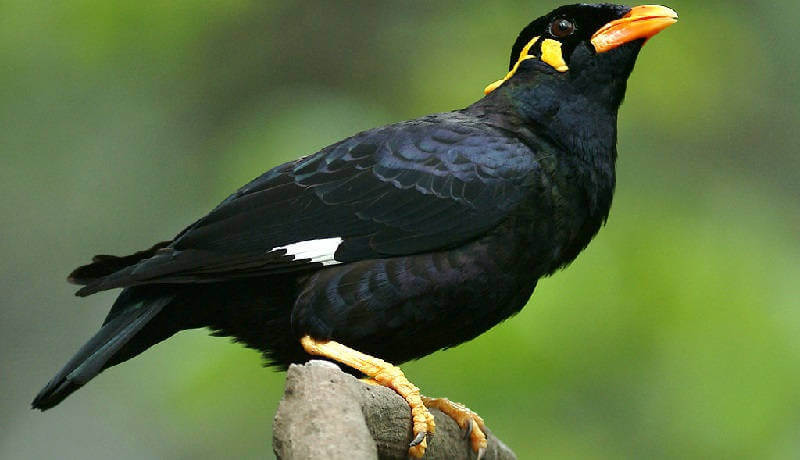 In the wild Beos, the males woo a female with their singing during the breeding season. It also keeps competitors away. Once a Beo pair have found each other, it builds a nest in tree cavities out of stalks, leaves, and feathers. There the female lays two to three light blue eggs with brown spots. The young hatch after 12 to 14 days. They fledge in four weeks. Both partners incubate together and raise the young together.

How do Beos communicate?

Beos can scream extremely loudly – preferably in the early morning and in the evening before bed. In a city apartment, they can be a real pain in the ass. And even during the day, they are anything but quiet. If you don’t want trouble with your neighbors, you should think twice about purchasing a Beo.

Some Beos imitate sounds from their environment or even speak complete sentences. However, you can’t teach them – either they do it by themselves or they never learn to speak.