If a rabbit or hamster is too calm for you and if you think the chinchillas are too common but want to stay with the small animal, bright, playful ferrets could be the right pets for you. But be careful: Although these are small animals (although ferrets are not rodents, but have predatory teeth), the effort to keep a ferret is by no means small. The cheeky, curious little animals that belong to the marten family and most likely descend from the polecat cost a lot of time, money, and sometimes nerves.

We tell you what you have to consider if you want to get yourself a ferret, how to make your apartment suitable for ferrets, and what basic equipment you need for keeping it.

Contents show
1 Ferret Enclosure: Size Matters
2 Keep Your Eyes Open When Buying an Enclosure
3 Toys and Exercise
4 The Litter Box Makes Ferrets Happy Too But Without Litter
5 Food for Ferrets: Above All, Lots of Meat 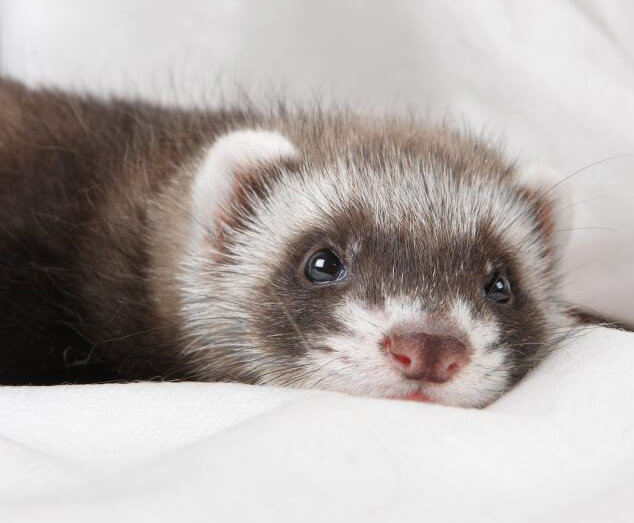 The magic word when it comes to keeping ferrets is “space”. Because carnivores need a lot of it. So that the animals are really well, the enclosure with two animals should by no means be smaller than two square meters. At least that’s what the Animal Welfare Act says. However, many ferret owners see it differently and advise that the area should not be less than four square meters with two residents. Why is the area recommendation only made for two or more ferrets? Because the members of the marten family are particularly social and should never be kept alone, otherwise they could become lonely and in the worst case die.

When it comes to the enclosure, you can only really stick to one fixed rule: bigger is always better.

Keep Your Eyes Open When Buying an Enclosure

However, if you cannot or do not want to build your own stable, do not have the opportunity to give the scurrying animals their own space, and do not want to keep them free in the apartment, you should at least not be blinded in the pet shop. Most of the cages available in stores (or on the Internet) are too small for ferrets – even if they are supposedly built for these very animals. In the case of the aviaries, on the other hand, they are usually high rather than long – but the four-legged friends actually prefer to run rather than climb.

So if you want something ready-made that really offers enough space for your darlings, you can keep an eye out for large rabbit coops. Those that are connected to an open-air enclosure and have multiple levels are best suited. So the rascals have space to run, but also their retreat for up to 20 hours of sleep a day.

The females in particular are alert and, in addition to the great urge to move, also have an immense playful instinct. The males (males) are a bit calmer, but that doesn’t change the fact that every ferret – regardless of sex – needs something to do. Among other things, cat toys and a scratching post are suitable for this purpose. Otherwise, they like to dig for life and they love to hide. Pipes, hammocks, caves, or even a small sandpit/flower pot – the more activity your darlings have, the less likely they are to steal or eat your things.

Nevertheless, this is exactly what can happen at any time during daily exercise – and ferrets absolutely need it. Because no matter how big the cage is, you should always give the animals a little more opportunity to let off steam. In this case, however, the apartment or free-range rooms must be made safe for ferrets: Windows must be closed, fragile items cleared away and your plants should be protected from digging attempts. In addition, you should pay attention to gaps or holes in the furniture so that the bullies do not disappear behind or in it.

The Litter Box Makes Ferrets Happy Too But Without Litter

In contrast to rodents, straw has no place in the ferret enclosure, and actually, they do not just relieve themselves next to their sleeping place. Many ferrets choose their own toilet at the beginning – and in the very corner where they do their first business – a litter box should be placed.

But leave the litter out, because ferrets like to take their food with them to the toilet, and if the pellets stick to the food and are devoured by the animals, this could lead to intestinal obstruction. Instead, line the plastic toilet with newspaper or paper.

Food for Ferrets: Above All, Lots of Meat 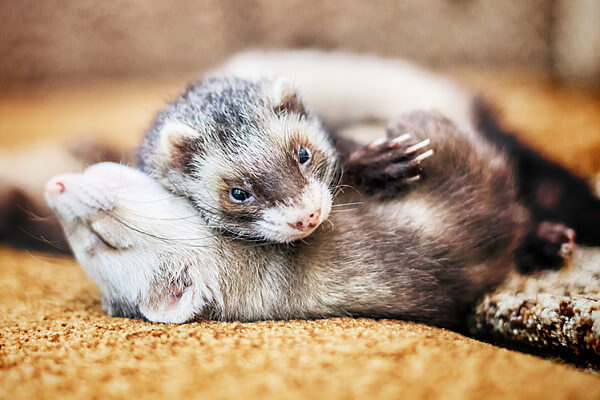 The menu should mainly consist of raw meat, such as beef, rabbit, or chicken. The exception is pork: it should never be placed in the bowl uncooked, as it can contain pathogens which, in the worst case, can lead to death.

You can also integrate cat food (wet and dry food) into the menu. Make sure, however, that this is high-quality feed with a particularly high proportion of meat. Sugar and grain should not be listed among the ingredients.

You can then refill the dry food regularly and leave it standing quietly instead of like with the house cat. Because ferrets digest particularly quickly and get hungry again quickly, it is important that they always have enough food available.

Dead feed chicks from specialist retailers, worms, eggs, vegetables, and additional vitamins – for example from a tube – round off the balanced diet of your ferrets.