Since the Balinese fur does not have an undercoat, housing with a secure balcony is a good alternative to being outdoors. In order to do justice to the animals’ high urge to move and learn, a large scratching post and sufficient activity are recommended. The sociable cat enjoys the company of fellow cats and should never be left alone for long periods of time. Due to its sometimes idiosyncratic character, it is only partially suitable for first-time cat owners.

The Balinese are descended from the better-known Siamese and differ from this mainly by the longer fur and the bushy tail. The graceful physique and the pointing of the fur largely correspond to that of the Siamese. The Balinese also inherited bright blue eyes from their Siamese relatives.

So your name has nothing to do with your origin. Since the name “long-haired Siamese” did not do justice to the beautiful animals, the Balinese were named after Balinese temple dancers because of their smooth gait.

After the breed soon became very popular in the USA, breeders began to perfect it.

For this reason, there is not only the slim, modern version of the Balinese cat but also the one in the style of the “old Siamese” – the so-called Thai cat (which is characterized by a rounder head shape and higher set ears). Just like Siam, the Balinese is very communicative animal and likes to communicate with people. The sociable cat enjoys being the center of attention and is happy to receive human attention. Since she is very affectionate and sociable, it can happen that she follows her person through the apartment with a moan. The intelligent velvet paws are real bundles of energy and want to romp around and climb a lot. However, they enjoy extensive pats as well as exciting hours of play. The Balinese know what they want and are sometimes regarded as headstrong but not arrogant cats. 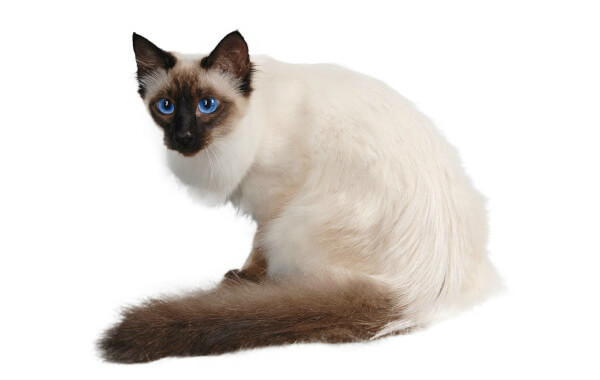 Since the semi-long coat of the Balinese has no undercoat, grooming is relatively unproblematic. Regular brushing does not harm, of course, and can be combined with extensive cuddling. However, due to the lack of an undercoat, the animals react sensitively to cold and wet conditions, which is why they are only suitable to a limited extent for walking outside and are more suitable for housing.

Like most oriental cat breeds, the Balinese are very social, so keeping at least two animals is recommended. Under no circumstances should a single kitty be left alone for long and needs close contact with her caregivers. Balinese are cats with a strong character. When they live together with their own species or other animals, they can react with jealousy because they like to enjoy the full attention of their family.

The intelligent cats are little breakout artists and need the opportunity to live out their strong urge to move around in the apartment. A large scratching post is therefore a must. After all, the house tiger should not be able to let off steam on the living room furniture and climb sufficiently. The Balinese are very eager to learn, so they can be encouraged with clicker or trick training or appropriate cat toys, for example.

With an average life expectancy of 15 to 20 years, the Balinese are long-lived, robust, and less susceptible to disease.