In the hobby area, especially in the aquarium hobby, LEDs were initially viewed with great skepticism. After all, when it comes to aquarium plants, it is important to simulate a spectrum that is as close as possible to sunlight. The photosynthesis of the plants only runs at full speed when there is sufficient light intensity, so that the first models that came onto the market partly lagged behind the “old” fluorescent tubes.

The aquarist who is eager to test, however, tends to be open to new things. This enabled test runs with different lamp types to be carried out quickly, experience to be gained and tips to be passed on to the industry. Within a short period of time, usable LED light sources were developed. These are now bright enough so that plants can develop their full growth and algae are slowed down at the same time. We have collected the clear advantages of LEDs for you here:

The marine aquarists also adopted LED technology with a slight delay. Special care was taken here for corals, which are even more light-hungry than freshwater plants. A particularly strong penetration depth of light is very important in this hobby area, as is a particularly high color temperature – expressed in Kelvin (K). If the tropical light in freshwater basins is around 6000K, i.e. white with a slight yellow component, the photosynthesis cells of the corals need a cold white, rather than bluish light with around 10,000K.

Lighting technology is currently very sophisticated and the industry puts all its energy into research and development of new LED technology, even better light sources, and longer service life. In the meantime, LED light sources are so powerful that the waste heat can ignite paper, and temperatures of several hundred degrees can be reached, although LED technology produces little waste heat compared to conventional light sources. That is why a compromise has to be found: bright luminosity with reduced heat generation at the same time.

This goes so far that, for example, LED is cooled with aquarium water and the heated water is fed back into the pool. This saves a lot of heating power, which instead would have had to be developed by electricity-guzzling rod heaters. On the other hand, many LED spots, which are supposed to concentrate the light in a special light direction, have cooling fins that act as a heat exchanger and quickly release waste heat into the surrounding air. Because the enemy of the LED is the heat – it shortens the life of the diodes.

Overall, the new lamp technology has longer usage times. A classic light tube, as we know it from older aquarium models, should be replaced about every 6-12 months. The reason is that the glow gases wear out inside the tubes and the luminosity steadily decreases. A tube costs around 10-30 euros, depending on the type and strength. For medium-sized and large aquariums, at least two lights are required. If you assume that an aquarium will be in operation for five years, you will have to buy two new fluorescent tubes up to ten times; Ongoing additional costs would therefore always have to be taken into account.

The energy consumption is relatively okay, a standard tube requires around 20-30 watts. However, the energy efficiency of LED lamps is particularly good. This advantage seems to be the most noticeable at first. However, the aforementioned point is more of the reason why LEDs are cheaper than fluorescent tubes: Although the acquisition costs are significantly higher, the investment pays off after about three years, because both the lower energy costs (approx. 50-70% less compared to “old “Lamps) as well as the elimination of re-purchase costs lead to savings.

The LED market is growing extremely quickly, and the range of quality differences cannot be greater. A “religion” of its own has already formed about which LEDs are best, how many lumens can be applied to which surface, which cooling effect is more efficient and which color components ultimately matter that the living beings that are later cared for get enough light energy.

The Internet is now full of DIY instructions that describe how to build entire lighting units yourself. The in-house designs, however, require a great deal of investment of time, because all parts have to be procured individually after a prior calculation of the required electrical construction and a certain amount of skill and knowledge is required for the assembly – rather than something for real hobbyists.

A look into the future

Some manufacturers target customers who simply want to replace their old tubes with LEDs. The solution can be very simple: Unscrew the tubes and replace them with LED tubes. The other variant is to completely remove the previous light bar including tubes and install a lamp system that is reminiscent of futuristic mini spaceships and is mounted using brackets and hanging ropes. Controls are possible that transfer the current light values ​​of the luminaire to smartphones and allow individual simulations, entirely according to the wishes of the user and, of course, tailored to the needs of the animals and plants for which the entire effort is made. This trend will continue until all light sources that rely on the glow or glow of gases or wires are a thing of the past. 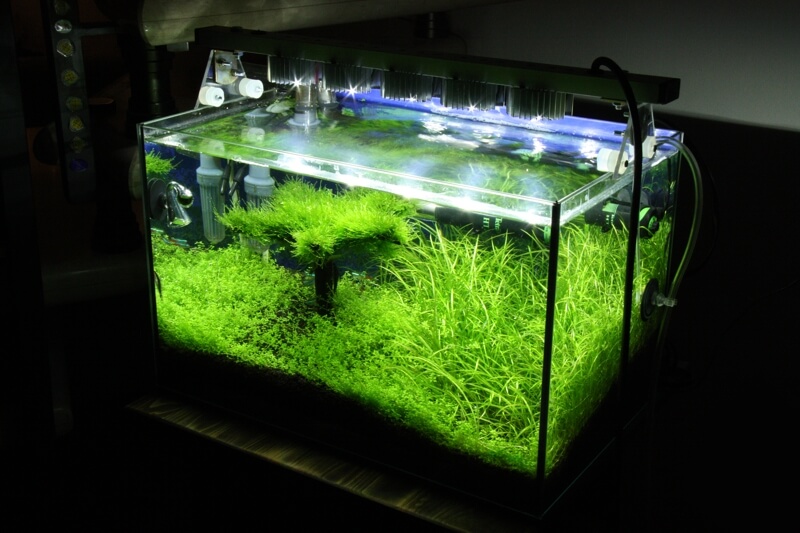 From the initial skepticism, a positive trend has developed and the advantages of LEDs are obvious: stronger, more efficient, cheaper! So if you have to change tubes in the near future, it’s time to jump on the speedy train and trust the clear and precise light from light-emitting diodes.